Problems and Pluses of the NSU Ro80 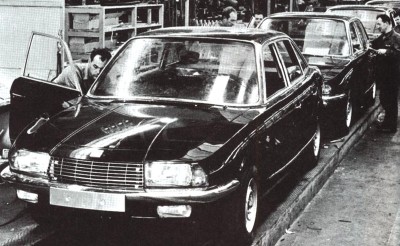 The NSU Ro80 assembly line at Neckarsulm. Initial production was 40 per day, after which the rate accelerated, then slowed to a crawl.
©2007 Publications International, Ltd.

The NSU Ro80's problems weren't long in surfacing. Most highly publicized were the short-lived rotor tip seals and resulting oil leaks, plus chamber-wall distortion and other maladies that sometimes necessitated a replacement engine or a complete rebuild as early as 30,000 miles. Some engines failed totally, the cars grinding to a stop in a cloud of oil smoke. But that was rare.

The most frequent complaint was a gradual loss of power and rising fuel and oil consumption. A tune-up and new rotor seals would usually put things right, but few believed it. In fact, some disgruntled owners, especially Britons, resorted to substituting European Ford V-4 or V-6 engines once word on the Wankel got out.

That word spelled trouble for NSU -- big trouble. Determined to salvage the situation, the firm instituted an extremely liberal warranty program, and many engines that simply needed minor attention were replaced free of charge. But instead of stemming the adverse publicity, this action only made the Ro80, its engine, and the company the laughingstock of German motordom.

People kept laughing long after the engine defects were corrected, not realizing that the Ro80 represented the wave of the future for the entire industry. Aside from a compact, lightweight power unit, it boasted front-wheel drive, all-independent suspension (coil-sprung MacPherson struts at each corner, plus rear trailing arms), power steering (ZF rack-and-pinion), and four-wheel power disc brakes. We take these features for granted now, but they were far from universal back then.

The 112.5-inch wheelbase was long relative to overall length, which combined with front drive for an unusually roomy interior.
©2007 Publications International, Ltd.

Or consider the wind-cheating, four-door sedan body: huge, upwardly curved windshield; low, rectangular grille; flowing fender contours; rounded "six-light" greenhouse; short, high tail. Here was the shape of the Eighties more than a decade before its time, and its 0.355 drag coefficient was sensationally low for the day. The 112.5-inch wheelbase was relatively long for a late-Sixties European, and combined with minimal front and rear overhang for exceptional interior space and the proverbial velvet ride.

Continue to the next page to learn about the features found on the forward-thinking NSU Ro80.