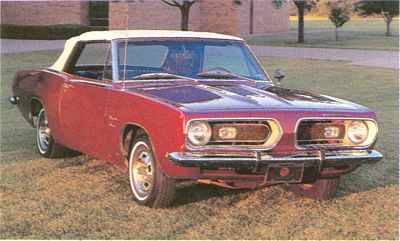 Ten years after Chrysler dramatically captured the styling initiative from GM with Virgil Exner's "Forward Look," the 1967-1969 Plymouth Barracuda almost repeated the feat -- but Chrysler itself was modest.

One designer frankly acknowledged GM's leadership when he said the Barracuda followed "GM's flowing styling" -- referring to the techniques rather than any outright copying. "Stylists attend the same schools, live and work in similar environments, and are influenced by one another's work."

Of course, that kind of thinking has spawned recent generations of Buicks that look like Oldsmobiles, and Eldorados that look like Toronados. The Barracuda may have followed a set technique -- smooth, flowing curves blended to form a palatable whole -- yet it was distinct, not easily confused with a Mustang or Camaro.

As in the past, the new Barracuda shared the Valiant under structure, but the skins were entirely different. The wheelbase was lengthened by two inches, the overall length by five, and a sleek hardtop and convertible joined the fastback.

Plymouth also placed the Barracuda in more competitive price territory: The hardtop started at only $2,449, the convertible around $2,775 -- exactly in line with Mustang.

It was darn good marketing, and it paid off. Production of 1967 Plymouth Barracudas totaled more than 60,000; 4,228 of these were convertibles, and the rest were about evenly split between coupes and fastbacks. The latter represented a much larger proportion of the total than did the Mustang fastback, suggesting the appeal of the handsome new Barracuda design to customers.

The new design brought more underhood room for a big-block engine, and Plymouth wasted little time in making a 280-horsepower version of the 383 V-8 an option. This could be combined with the familiar Formula S package.

See the next section for details on the 1968 and 1969 Plymouth Barracudas. 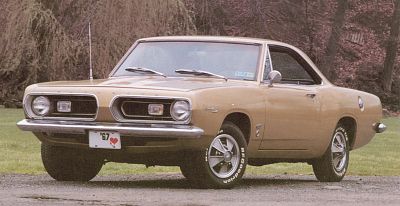 The little-changed 1969 Plymouth Barracudas were the last of this generation.
©2007 Publications International, Ltd.