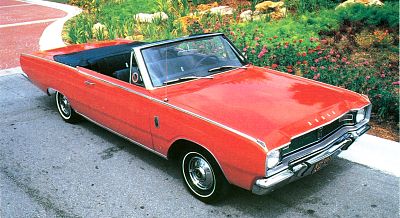 The 1967-1969 Dodge Dart GT GTS series steadily progressed from safe, family-oriented cars to all-out speedsters. Ever since 1965, Dodge had been issuing a GT edition of its compact Dart.

Name aside, these upgraded hardtop coupes and convertibles didn't quite qualify as full-fledged Grand Touring or performance machines -- not with a 273-cid V-8 as top engine, and a hard-to-combat image as low-budget, uninspired family movers.

When Darts enjoyed a major restyle for 1967, the GT came along for another trial run, winding up the year with a modest but welcome sales gain. Bigger inside and out, more rounded along the bodysides, the reworked Darts kept the same 111-inch wheelbase as the originals, but delivered, in the words of the sales brochure, "... more room. New pow. More posh."

Well, that was the claim. In reality, not much had changed apart from a cleaner fastback-styled silhouette and full-width grille, and a fresh selection of vinyl and cloth/vinyl interiors. Some of that size increase was illusory, in fact, since overall length actually shrank by a fraction of an inch.

Clearly, more than bucket seats and an identifying plaque were needed to turn a plain-Jane Dart into an honest GT. Ordering the optional Rallye suspension package helped, especially when combined with front-disc brakes and D70 × 14 Red Streak tires.

So did the more potent four-barrel variant of the 273-cid V-8, available with either TorqueFlite or a four-speed, and an optional tachometer. Nevertheless, these useful doodads were attached to an otherwise no-frills American compact that had a difficult time eliciting excitement.

Something was missing. A wider front end had given the 1967 Darts a broader stance and additional engine room -- but nothing new to fill that extra space. That shortcoming was corrected for 1968 with the arrival of the GTSport (GTS, for short) as a member in good standing of the new Dodge "Scat Pack," which also included the Charger and Coronet R/T editions.

Beneath the hood of the freshened Dart sat a zesty new 340-cid V-8 with four-barrel carb and high-lift camshaft, eager to send its 275 horsepower to the ground via a Rallye suspension and E70 × 14 wide-tread tires.

Scoop-style hood louvers, square-tipped dual exhaust pipes, and "bumblebee" stripes out back told the world that this was a new breed of Dart, ready to take on some (if not all) comers. Anyone who didn't care for those flashy rear stripes could nix them.

Continue reading to learn more about the Dodge Dart's gradual transformation into a racing machine.

If that wasn't enough to induce "Dodge Fever," then perhaps the optional 383-cid V-8, also four-barrel carbureted but churning up 25 extra horses for the 1967, 1968, 1969 Dodge Dart GT GTS, could finish the job. With that choice came a vented, bulged hood.

TorqueFlite automatic was the standard transmission, shiftable through an optional console, but a four-speed manual gearbox cost no more. Performance got a boost in the regular GT line as well, with a 318-cid V-8 option joining the 273.

Far more Dart GTs than GTSports found customers, helped by the simple fact that they were more than $500 cheaper. The GTS hardtop and convertible drew scads of attention but not as many orders, with only 8,745 built.

A modest face-lift with fresh horizontal-bar grille and restyled taillights didn't change the Darts dramatically in 1969. Joining the GT and GTS this time was a bargain-basement Swinger, available with the 340-cid V-8 engine but carrying fewer extras.

While Dodge's GTSport never quite ranked with a Hemi-Charger or Super Bee in the public eye for all-out performance, the figures and contemporary comments speak for themselves. With the 340-cid engine and automatic transmission, Motor Trend required a measly six seconds for its GTS to hit 60.

Rocket-like acceleration wasn't its only skill, either. Car and Driver called Dodge's top Dart a "tough little machine on curves and bends." Car Life voted GTS one of the best cars of the year: "more nimble than most" and able to deliver "neck-snapping acceleration," actually topping a Hemi-equipped Charger for "versatility, agility, roadability" and off-the-line starts.

Because some folks never are satisfied, a few hundred Darts even had 440-Magnum engines installed by outside specialists. Even without such unofficial help, though, Dodge had turned its dowdy compact in sheep's garb into a snarling wolf, eager to snap at the heels of its muscle-car rivals.

GTS production slipped to 6,702 for this final season in the Dart lineup, and only the Swinger would hang on into the Seventies.