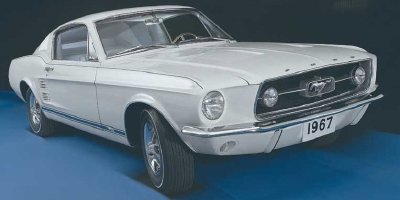 All '67 Mustangs got new lower-body sheetmetal designed to suggest stronger performance, but the 2+2 also got a sweeping new full-fastback roofline patterned on that of Ford's LeMans-winning GT40 racer.

Ford Division wanted everything about the 1967 Mustang to be improved. The '67s retained the original Mustang's basic chassis and inner structure but were redesigned or reengineered most everywhere else. Most obvious was fresh styling created by the Ford Division studio under Gale Halderman. Given the tricky task of changing an instant icon without really changing it, designers explored various combinations of crisp lines and soft, rounded forms through the usual plethora of sketches and clay models. They also toyed with Mustang's trademark mouthy grille, bodyside sculpting, and trim tail.

Even so, some proposals strayed fairly far afield, ranging from bulky and square to lithe-looking, almost European. But the car that ultimately emerged was a nicely logical evolution of 1965-66. "We really took a number of cracks at it," Halderman told Witzenburg. "For '67 the theme revolved around more performance, so we made it a little stronger in appearance all over. The side scallop got deeper, for instance, and the grille and rear panel were enlarged. But we were very adamant about not changing...that rear hop-up look."

Though Don Frey took the reins at Ford Division as the '67 took shape, Lee Iacocca, promoted to corporate management, couldn't stay away. "Back in those days, Iacocca appeared [in our studio] daily," Halderman recalled. "The Mustang was his baby, and he watched it very carefully. We really didn't do anything on that car that he wasn't fully aware of and part of."

Except for the 2+2, styling of the 1967 Mustang amounted to new outer sheet-metal from the beltline down. Wheelbase was held at 108 inches, but overall width swelled by 2.7 inches. A half-inch height increase improved headroom. Overall length tacked on two inches, most of it via a tidier nose with a more aggressive grille bereft of flanking "gills." Halderman's comment notwithstanding, designers did exaggerate the rear hop-up a little. They also made the tail panel concave, as well as larger, and finally won approval for the more-expensive individual taillamps they'd long desired.

For a new Exterior Decor Group option they applied thin bars to the back panel and conjured a special hood with wide, longitudinal recesses suggesting scoops. A nifty gimmick were turn-signal repeater lights nestled at the scoops' forward ends, easily visible to the driver. The 2+2 was the most radically changed '67 Mustang, gaining a sweeping full-fastback roofline inspired by that of Ford's GT40 racer, then making its mark at LeMans and other international endurance events. The new fastback retained flow-through ventilation but with air ducted through a dozen rear-quarter roof louvers instead of five vertical slots.

Changes inside were no less numerous. Though the cabin remained a close-coupled affair with standard front bucket seats, the available console now swept up to meet a new "twin-cowl" instrument panel unique to Mustang. Drivers faced a pair of large, circular dials below three smaller gauges; ordering the optional tachometer eliminated the ammeter and oil pressure displays in the main starboard hole. Besides looking cool, the bulkier dash allowed for integrated air conditioning, though a hang-on unit was still available from dealers. Newly optional for all models was the useful Tilt-Away steering wheel recently pioneered by the posh Thunderbird, as well as AM radio with 8-track tape player and a "Convenience Control Panel" above the radio -- reminder lights for door ajar, parking brake, low fuel, and seatbelts.

The '67 Mustang's jazzy new "twin cowl" dashboard allowed for integrated air-conditioning and was unique to Mustang, part of Ford's effort to give the  pony car a more upscale persona.

Hardly anything was overlooked. Among other new features were Ford's handy reversible keys, manual keyless door locking, standard windshield washers (operated by foot-pedal), tighter door and window seals, and lower-effort window winders. A unique new ragtop option was a glass rear window with a middle crease that allowed more-compact top folding. It was naturally more durable than the traditional plastic affair, immune to "clouding up" with age and weathering.

Want to find out even more about the Mustang legacy? Follow these links to learn all about the original pony car.