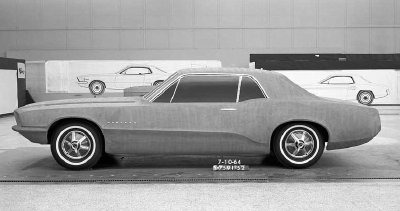 Mustang had just left the corral when work on the follow-up '67 model See more pictures of the 1967 and 1968 Ford Mustang.

When it came time for its first significant revamp, the original pony car was no longer the only pony car. It was clear the 1967 Ford Mustang would have to fight for sales.

Designers who would shape the '67 model were in a unique position, however. In the 1960s, a new car took some three years to go from drawing board to showroom. Typically, designers and engineers were working without knowing how the public liked the car they had just finished.

But when work on what would become the 1967 Ford Mustang began in summer 1964, the first edition was already a huge hit. That posed the knotty problem of what to do for an encore. While Ford expected some changes would be needed after '66, it wasn't clear what those ought to be. Moreover, as program head Ross Humphries later told author Gary Witzenburg: "At the time the '67 was planned, we really didn't have any idea that the original was such a winner. Things did look awfully rosy, but we didn't know how long it was going to last." Fad or not, Mustang's instant high success got Ford cracking on a slightly larger, more luxurious pony car by late 1964. It would emerge for '67 as the Mercury Cougar.Meantime, Ford Division was left to ponder how archrival Chevrolet might respond -- if at all. For a time, General Motors design chief Bill Mitchell insisted his company already had a Mustang-fighter in the beautiful second-generation 1965 Corvair. But that was just a smokescreen for the super-secret 1967 Chevrolet Camaro, a true Chevy pony car being readied for launch in late 1966. As Ford engineer Tom Feaheny recalled for Witzenburg: "It was a long ways down the road before we were aware they were coming after us."Beyond that, Feaheny admitted that "[the '67 Mustang] was an opportunity to do a lot of refinement work. Frankly, the amount of engineering in [the first model] was not as great as it could have been...We really wanted to do the job right the second time around." He also noted that product planning chief Hal Sperlich wanted to "one-up the original in every respect: model availability, options, handling, performance, braking, comfort, quietness, even appearance where we could without making a major change." Dovetailing nicely with that goal was the redesigned 1966 Ford Falcon, which grew from cost-conscious compact to a slightly smaller sister of the midsize 1966 Ford Fairlane. This meant Mustang would now have to share front-end components with those cars for cost and manufacturing reasons. And as the Fairlane was planned for big-block V-8s, Mustang's engine bay was bound to get wider too. Moreover, arrival of the 1964 Pontiac's GTO muscle car gave Ford an extra incentive to offer Mustang with a big-inch engine. After all, another "horsepower race" was on, and even a pony car can always use more oats.Want to find out even more about the Mustang legacy? Follow these links to learn all about the original pony car: