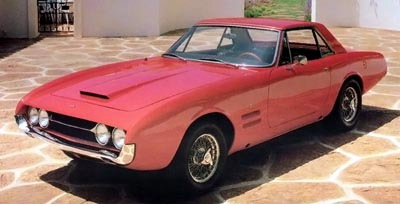 The Ghia 450 SS was born from a suggestion to the Italian maker from a Hollywood producer. See more classic car pictures.

The 1966 Ghia 450 SS was an example of the successful collaborations between Chrysler Corporation and Ghia of Turin.

During the 1950s and 1960s, Chrysler often contracted with Ghia for design and/or manufacture of its custom show cars, so it was only fitting that the famous Italian coach-builder commonly looked to Chrysler for engines to power its own creations. A well-known example was the 1956-1963 Dual-Ghia, a car coveted by movie stars in the 1950s. A lesser-known one was the 450 SS.

The history of the 450 SS begins in the spring of 1965, when noted Hollywood producer Burt Sugarman spied a Ghia-bodied Fiat on the cover of Road & Track magazine. So struck was Sugarman by the image, that he approached Ghia and managed to persuade the company to put a similar design into series production.

The 450 SS was fitted with either a four-speed manual transmission or a three-speed TorqueFlite automatic.

Chosen to power the sleek convertible was Chrysler's then-new 235-horsepower, 273-cid V-8, which was offered in compact and intermediate-sized Dodges and Plymouths. It was mated to either a four-speed manual transmission or three-speed TorqueFlite automatic, and resided in a tubular frame clad with steel body panels.

Gracing the dashboard was a complete complement of gauges set in a simple flat-faced instrument panel. Finishing off the interior were leather-trimmed seats and surfaces, wood-grained console, a wood-rimmed three-spoke steering wheel, and toggle switches for the ancillary controls. A vestigial rear seat provided comfortable accommodations for none.

Also standard were power steering and brakes, a limited-slip differential, and wire wheels.

Base price when new hovered at close to $12,000 -- a lofty sum in those days -- and adding the optional air conditioning and removable hard top would push the final tally past $13,000. At those prices, the 450 SS was destined to be an exclusive item, and production was limited to about three years and 50 copies.

The original purchaser of the Ghia featured here was TV talk-show host Johnny Carson, who gave it to his private pilot as a gift. It has since received a complete restoration, and one-time owner Gerald Quam of Santa Barbara, California, testifies that unlike some limited-production cars of its type, the 450 SS handles and drives as good as it looks.