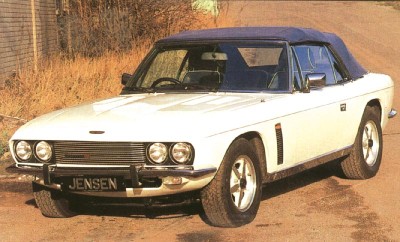 The 1987 Jensen Interceptor Mark IV could be had as a ragtop or hatch coupe.
PIL

Reorganization was enough to give a new lease on life to the Jensen Interceptor in the 1980s and 1990s. As it turned out, Parts and Service had retained all the original Interceptor tooling, which it used for the next 10 years to maintain and even restore existing cars for enthusiastic owners.

It was that enthusiasm, plus sufficient profits from the "service" business, that eventually attracted new ownership interest, and by 1986 P and S had been reorganized as Jensen Cars, Limited. More amazing yet, the revitalized firm announced its intention to produce an updated Mark III called, logically, Mark IV, though this was listed by some sources as "Series 4" or "S4."

Production wouldn't be high: only about one a month -- a dozen or so cars per year. Yet the mere fact of this revival after so many years spoke eloquently of the Interceptor's ageless appeal. Moreover, such tiny numbers made it a profitable proposition for this smaller Jensen company.

Though even more of a handbuilt car than Interceptors I-III, the Mark IV was remarkably like them, right down to the original 105-inch wheelbase. The Convertible returned, as did the hatch coupe, though the latter was usually referred to as a "Saloon" (sedan) and could be supplied on special order sans backlight with conventional boot, which made it look odd indeed. A revival of the convertible-based coupe, renamed "Hardtop," was announced in late 1986.

Because Chrysler had eliminated its big 440 V-8 years before, the Interceptor IV was switched to that firm's 360-cubic-inch small-block unit with standard four-barrel carburetor or, at extra cost, multipoint fuel injection. Otherwise, all was much as before save paint and trim -- which could now be virtually anything a customer desired, appropriate for a coachbuilt machine and much higher prices: initially £39,950 for the Saloon and £45,950 for the Convertible, about $60,000-$70,000 U.S. at then-existing exchange rates.

The 1991 Jensen Interceptor Mark IV was a testament to the lightness of the original Mark I design.
PIL

Little has been heard of Jensen Cars since late 1987, when it was the subject of much speculation. At that time, Automotive News in Detroit reported that a restyled "Interceptor V" meeting all the latest American standards, including passive restraints, would appear in 1989 with a $90,000 US. price and a "7.8-liter" Chrysler V-8.

Production continued to trickle in until 1993, when financial troubles forced Jensen to once again close its doors. An S8 version came on the market in 2001. The two-seater sport car sold for £40,000, but only a handful were made before financial troubles once again -- for a final time -- brought the Jensen Interceptor to an end in 2002.