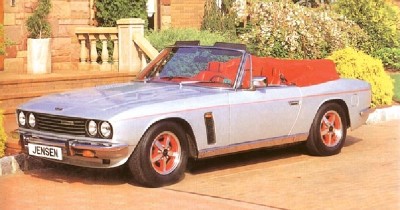 One of the most exclusive and desirable of the Jensens produced in the 1966-1976 era was the Interceptor convertible. The car seen here is a 1975.
PIL

But the big news for the Mark III Interceptor was a second, more potent model, the SP, packing a 440 with triple two-choke Holley carburetors, good for a smashing 385 horsepower (SAE gross). Those carbs reportedly prompted the initials SP, denoting "Six Pack" as in its domestic Chrysler applications.

As one might guess, SP performance was formidable. Autocar, testing one in 1971, reported 0-60 mph in just 6.9 seconds (versus about 7.5 for the 383 Interceptor) and a top end of 143 mph (against 130-plus) -- plus overall fuel "economy" of just 11.5 miles per U.S. gallon. Only a standard vinyl roof and discreet hood louvers distinguished this prime cut of British beef from the standard article.

The badge announces that this Interceptor convertible is a Mark III, in this case a 1974 model.
PIL

But the SP didn't have long to live because it was dropped after 1973 in the wake of the Middle East oil embargo and the resulting worldwide energy crisis, plus continuing inflation. Production came to just 105 units. After this, there was again one Mark III Interceptor, still with the single-carb "J-type" 440 and 300 horsepower.

That energy crisis sent fuel prices soaring around the world, leaving Jensen, like most other supercar builders, fighting for sales. Nevertheless, the firm managed a smart Mark III Convertible in March 1974, which was unveiled at Geneva. This was essentially the "glassback" coupe with a power-operated soft top -- fully lined with wool, but not too bulky when folded -- and a tail slightly restyled to form a separate trunk.

Though sales were well down by mid-decade and the basic design some 10 years old, the Interceptor might have carried on had it not been for the Jensen-Healey, which failed to attract the hoped for sales as a medium-priced sports car and thus lost Jensen Motors a lot of money.

The hatch coupe was the most popular model among the Interceptors.
PIL

This prompted Kjell Qvale to pull out, and the company went into liquidation during 1976. However, at least three fragments of the business survived. Among them was a so-called Parts and Service Division that was later reorganized with new management and new financing.

To read about the Jensen Interceptor in the 1980s and 1990s, continue to the next page.