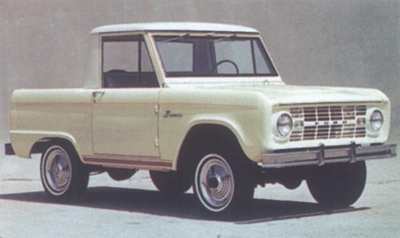 In their 1966 Ford Bronco reviews, automotive magazines largely agreed that the vehicle was best suited for off-road use.

Motor Trend found that in two-wheel drive, the Bronco "leaped to 30 mph in 5.5 seconds, passed 45 mph in 11.5 seconds, and hit 60 in 21.2 seconds, crossing the finish line (of the quarter-mile strip at Ford's proving ground test track) in 21.5 seconds, with our fifth-wheel electric speedometer reading an accurate 62 mph." Top speed was approximately 80 mph.

MT described the Bronco's hill climbing ability this way: "Ford's test track has a steep, paved hill for various testing procedures. It's about 50-60 feet high and has steep grassy slopes on each side. The Bronco cantered right up the slopes without a whinny in low-range first, but we were even more impressed when it did it in third after a quick shift from first.

"A shift into reverse at the top allowed us to make a leisurely withdrawal in complete control with some help from the brakes. Backing up the hill was just as easy -- from the driver's seat it looked straight down."

Car Life's test, made in California, not Michigan, put the Bronco in a real-world environment. "A tour of Southern California freeways immediately demonstrated the low-geared Bronco should best be given its head in back country," said the magazine.

"A comfortable highway cruise for this particular Bronco was 55 mph -- slow by the majority of freeway standards. A speed of 60 mph created tight winding of the smallish engine and audible workings of transmission and transfer cases; 74 mph, absolutely the upper limit of Bronco progress, was difficult to maintain, wearing and probably battered the engine unnecessarily.

"Thus it was that the Bronco was taken to an area more suitable for assessment of its capabilities -- the mountainous spine of California, a land of steep canyons and draws, boulders, brush and pine, wet and splattered with patches of melting snow and ice along the sun-scarce northern sides of sharp hogback ridges."

Here, Car Life concluded, "The Bronco's suspension . . . provides a ride that is stiff, to say the least, but not objectively harsh. Steering is very positive and effortless, though the overall ratio of 24:1 is sometimes too slow for some of the quick boulder-dodging maneuvers required of the off-the-road driver. . . . The Bronco is fine for hombres who don't care for horses, but who want to hit the horse trails.

"The Bronco can tote grub from the general store or pack the young 'uns off to the schoolhouse. In a pinch the Bronco can help with the spring plowing. Best of all about the Bronco is that West of the Pecos rodeo aura that makes a driver shout, 'Eeeeeaaaaayyhhooo!' as he plows four-wheel full tilt through a mountain stream or breaks airborne over a mountain top."

The basic Bronco wagon weighed 3,025 pounds and carried an 800-pound payload. With the heavy-duty package, load capacity was about tripled.

Standard tires were 7.35 x 15 black sidewall tires, which were not up to even the basics of four-wheel-drive vehicle use. This was probably because Ford wanted to keep the price down and let salesmen move the buyer up to a wide choice of high-profit optional tires. (Car Life suggested that the Bronco buyer who wanted both highway and brush use should consider two sets of tires and wheels.)

There was no explanation for giving the Bronco brakes that were borderline adequate. Neither was there an explanation as to why it was not offered with optional two-wheel drive since a portion of the market seemed to be suburbanites who wanted the Bronco for show rather than go.