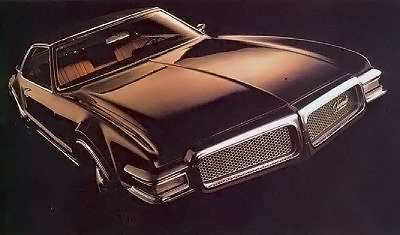 A blunted nose with split grille announced the 1968 edition.

Oldsmobile had scheduled a heavy face-lift for the 1968 Toronado, and it helped a little with slumping sales. Production went up to near 26,500. The main styling work appeared at the front, a full-width bumper/grille with a short vertical divider. The headlamps were still hidden, but instead of pivoting up out of the nose they were now fixed, mounted behind dummy grille sections that lifted up whenever the lamps were switched on. Once again, there were minor chassis tweaks to make the ride more lush.

Though not intended as a performance car, the Toronado got swept up somewhat in the division's "Dr. Oldsmobile" campaign for 1968. The standard powerplant was upgraded to the new 455-cubic-inch engine, which took over for the 425 that year throughout the Olds lineup. It was rated at 375 horsepower in the Toro. And there was an engine option for the first time. Listed as the W-34, it came with special camshaft, heat-treated valve springs, modified distributor, and low-restriction dual-exhaust system, good for a rated 400 horsepower.

Car Life tested a W-34 for its May 1968 issue, reporting a top speed of 123 mph and "best" fuel consumption of only 12 mpg. Said the editors: "It is not an ordinary automobile. When fitted out like the test car it is expensive, but it has some strong attributes: high performance, dependable handling, strong masculine styling, the flair of front-wheel drive, and the availability of enough luxury options to furnish a pleasure dome for a khan. Taken together, they describe only the Toronado, an unusual and enjoyable automobile."

The Toronado's rear deck was freshened up for 1969.

Toronado rolled into its fourth year with a restyled rear end that added a bit more trunk space and 31/2 inches in overall length. Styling was otherwise much the same as before, but you could now order an optional vinyl roof covering that destroyed the clean C-pillar line. There was nothing new on the engine chart, but engineers added more sound insulation and fiddled with motor mounts and spring and shock absorber calibrations in a quest for greater refinement.

The Toronado notched a modest gain in sales, which rose to about 28,500 for the model year, still way below the 1966 figure. One factor in this so-so sales performance may have been another GM competitor, the Cadillac Eldorado, introduced for 1967. Like the Riviera, it was based on the Toronado bodyshell and even borrowed its front-drive mechanicals -- and it had the prestige of being a Cadillac. All this only undermined the Toro's image as a unique and exclusive product.

Furthering that impression was the more glittery and less distinctive 1970 model. Headlamps were exposed for the first time (some owners had complained the headlamp doors acted up on the earlier models), trim was rearranged mostly for the sake of change, and a more conventional instrument panel appeared. Base price went over $5,000 (by $23) for the first time (it was $4,836 the year before), though you now got the previously optional front disc brakes as standard, still with power assist but augmented by a new tandem booster that produced higher line pressures.

Both versions of the 455 V-8 returned at their previous power ratings. One interesting new package option appeared this year. Dubbed "GT," it consisted of special seats, front console, and discreet ID emblems. Less than 1,000 cars were so equipped, indicating most Toronado buyers simply weren't interested in anything remotely like "sport." Model year sales skidded to about 25,500, thus ringing down the curtain on the first-generation design.

The pioneering 1966-1970 Toronados were almost instant collectibles. And for the enthusiast who marches to the beat of a different automotive drummer, we can think of no better choice.