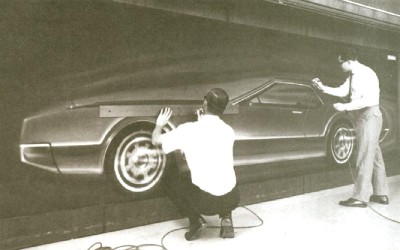 Long before work on the Oldsmobile Toronado began, a talented young engineer named John Beltz was on a fast track toward the division's top engineering post and, quite possibly, the general manager's job. Beltz was fascinated with the possibilities suggested by a front drive mechanical package and quickly rallied a group of colleagues to pursue them. It was a classic example of being in the right place at the right time. As GM's most innovative division, Oldsmobile was certainly the best place in the company to work on a new drivetrain that might be as significant as the division's breakthrough Hydra-Matic Drive of 1940 or (with Cadillac) the industry's first high-compression overhead-valve V-8 in 1949.

And the timing couldn't have been better. By happy happenstance, GM was about to embark on a design program to produce a new compact car, slated for 1960 introduction. The result was the novel rear-engine Chevrolet Corvair, GM's response to the growing popularity of imports like the VW Beetle in the Fifties. Fisher Body Division had developed a new unitized body/chassis structure for the Corvair, designated the Y-body, with a 108-inch wheelbase. Buick, Olds, and Pontiac took one look and wanted in, only they wanted more passenger room and a more conventional drivetrain. Accordingly, Fisher stretched the Y-body to a 112-inch wheelbase for three slightly larger compacts that would bow for 1961. What better place for Beltz's new front-wheel drive?

Oldsmobile looked at a variety of front-drive arrangements for what would become the F-85, the Buick Special, and Pontiac Tempest. Gears, belts, and chains were considered for transferring the drive, and a purpose-designed V-6 engine and four-speed manual gearbox were built and tested. The effort progressed as far as a running prototype outfitted with an aluminum-block V-6, mounted transversely in the now-popular manner, and connected via chain to an automatic transmission. But cost again reared its ugly head. The production F-85 arrived with bog-ordinary Hotchkiss drive and a front-mounted V-8 courtesy of Buick, though it did have an aluminum block. The Tempest, of course, was the only one of this trio with any engineering distinction: John Z. DeLorean's unusual rear transaxle arrangement, which usually produced some pretty unusual cornering behavior.

Beltz was undeterred. Over the next couple of years, division engineers and GM Engineering Staff continued working on a variety of fronts to perfect a marketable front-drive system. Their efforts culminated in a February 1964 presentation made by Beltz and his allies to top corporate brass gathered at GM's Mesa, Arizona proving grounds. Bearing the XP-784 project designation, it was not a compact, but a two-door hardtop coupe almost as large as a big Ninety-Eight.

Oldsmobile badly wanted this car to counter the highly acclaimed Riviera from intramural rival Buick and as a challenger to Ford's well-established four-seat Thunderbird. To be sure, it didn't really need front drive -- certainly not to open up more space in an already roomy passenger compartment. But it was a feature perfectly in keeping with Oldsmobile's "innovator" tradition -- and it impressed the execs with handling and roadholding that were uncanny for such a car. The response was enthusiastic: the front-drive Olds was approved for 1966.

Go to the next page to read about the Oldsmobile Toronado's unique styling.