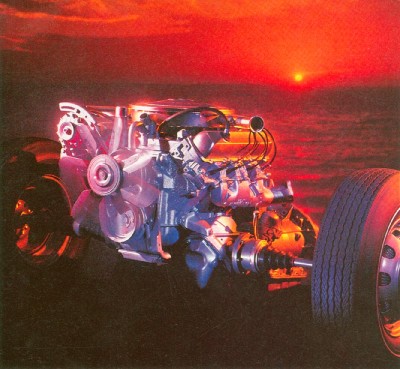 A look at the 1966 Toronado’s compact driveline package. The engine differed from other versions of the 425 in having a reshaped carburetor and intake manifold to clear the low hoodline.

The Oldsmobile Toronado certainly wasn't the first front-wheel drive car -- the basic engineering principles were largely established by the early Thirties. But the Depression was simply the wrong time for an automaker to introduce anything radical or untried, particularly if it made a car more expensive. So while many manufacturers experimented with front drive, few took the production plunge. For most of those that did, the results were disastrous.

Though front drive's greater compactness and superior wet-weather traction were widely appreciated even in those days, its main attraction was the much lower ride height it conferred, a styling advantage with obvious sales implications. Unfortunately, front drive was -- and still is -- more costly to design and produce than conventional rear drive, and most of the early systems were not at all reliable. In the face of an ailing national economy and a faltering market, the decision by Ruxton and Gardner to adopt front drive only hastened their demise, and mechanical problems ultimately caught up with the Cord. The only front-drive car of the prewar era to achieve genuine sales success was Citroën's significant traction avant sedan series, introduced in 1934 and the mainstay of the French automaker's lineup through the early Fifties.

But front drive was far from dead in Detroit. Partly in response to the Depression, the Big Three companies had been looking into the possibility of offering much smaller models alongside their standard offerings, just in case the market should want them. A variety of experimental projects were initiated towards this end beginning in the mid-Thirties, and were well advanced as World War II approached. Because of the more difficult packaging problems involved with a smaller car, these programs did not necessarily rule out radical engineering solutions, and front-wheel drive was one of those investigated, along with rear engine/rear drive, radial engines, air cooling, unit construction, and other way-out ideas.

Some of this work was carried on into the war years, as time permitted, with an eye to postwar planning. Both GM and Ford had concluded there would be a strong upsurge in small-car demand once peace returned, and both had new compact designs all but locked up when the industry resumed civilian production in late 1945. But the demand simply wasn't there -- and wouldn't be for another dozen years or so. And because accountants at both firms had calculated that a small car couldn't be built or sold for that much less than a standard-size model, there was no incentive to build compacts -- or resort to costly complexities like front drive.

It may have languished on Detroit's back burner in the Fifties, but front drive wasn't completely ignored. General Motors engineers gave some serious thought to it in 1954 for the LaSalle II, a long-hood/short-tail roadster then being developed for the 1955 Motorama season. However, the problems of making front drive compatible with the 429-cubic-inch V-8 planned for this one-off proved insurmountable in the short time available, and the show car appeared with an ordinary front-engine/rear-drive format.

On the next page, learn about the design process that resulted in the Oldsmobile Toronado.