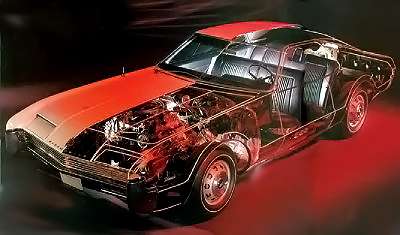 The Oldsmobile Toronado personal-luxury coupe marked the return of front-wheel drive in Detroit for the first time since the Thirties and provided a long-range forecast of the design revolution that would sweep the U.S. industry in the Eighties. Here's the story of the engineering tour de force that now ranks as one of the most collectible automobiles of the Sixties.

Quickly now: name the automotive blockbuster of model year 1966. Answer: the Toronado. It not only made headlines in all the major enthusiast magazines and most of the national news weeklies, but also stopped crowds at auto shows and dealer showrooms from coast to coast. And what stopped the crowds mainly was one feature: a virtually flat passenger compartment floor. You see, the Toronado was the first American car with front-wheel drive since the Cord 810/812 of three decades earlier. Not only that, it was the largest such car ever attempted: a big personal-luxury coupe riding a full-size 119-inch wheelbase and tipping the scales at better than two tons. Skeptics said front drive would never work on such a heroic scale, but Oldsmobile proved them wrong -- and did it beautifully.

Today, the first-generation Toronado is recognized not just as an engineering tour de force but as the stage-setter for GM's near-wholesale commitment to front drive in the Eighties. Add in luxury, fine craftsmanship, exceptional roadability, and distinctive styling, and you have a modern milestone that stands as one of the most collectible automobiles in U.S. postwar history.

The idea of driving a car by its front wheels instead of the rear ones was nothing new even in the Sixties. Though it's difficult to say who tried it first, the basic engineering principles were largely established by the early Thirties and the concept generally regarded as workable, though far from practical. Aside from Harry Miller's successful Indianapolis racers, one of the first American cars to employ front drive was the first to bear the name of Errett Loban Cord, the classically styled, low-production L-29 of 1929-1931. And Audi likes to remind us nowadays that it pioneered the concept in Europe as early as 1931 with its first car, the aptly named "Front" model designed by August Horsch.

On the next page, learn the history that led up to the Toronado's front-wheel drive.