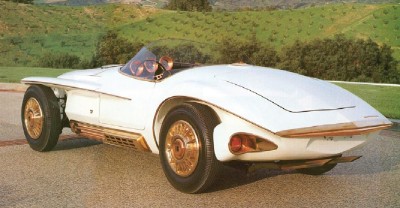 The 1965 Mercer Cobra would never have been built had it not been for the Copper Development Association, which wanted to show the practical modern uses of copper in automobile design. But it certainly would not have looked the way it did were it not for Virgil M. Exner and his son, Virgil, Jr., who transformed it from concept to reality.

Virgil Exner's long styling career began at General Motors, where he is said to have created Pontiac's long-running hallmark, the "Silver Streak." In 1938, he was hired by Raymond Loewy, and contributed to the dramatic 1947 Studebakers, before disagreements with Loewy caused him to leave.

He soon joined Chrysler Corporation, where he produced his finest production styling: the famous "Forward Look" that wrested design leadership away from General Motors for the first time in a generation. By 1963, he had left Chrysler to freelance, and the Mercer Cobra was one of his, and his son's, first independent projects.

The Cobra chassis provided the perfect platform to showcase this copper-inspired design.
PIL

Design-wise, Exner was a traditionalist, who considered the timeless hallmarks of the Classic era as appropriate on modern cars as they were in the late 1920s and 1930s. This produced bold concepts both good and bad. The good included open-wheel designs to show off wire wheels, handsome traditional grilles, and rakish emphasis of fenderlines; the bad included "toilet seat" spare tire impressions and freestanding head- and taillamps, as seen on early 1960s Imperials.

When Esquire magazine asked the Exners to create renderings of what four famous Classics might look like in 1963, it was an assignment to their liking, playing to their strengths. Along with a modernized Packard, Stutz, and Duesenberg was a new Mercer. The "Cobra" half of the formula was provided by Caroll Shelby.

Copper was incorporated under the hood of the 1965 Mercer Cobra.
PIL

According to writer Michael Lamm, the Exners were approached by George M. Hartley, president of the Copper Development Association, at almost precisely the time they had finished the conceptual rendering of the modern Mercer. "The old Mercer had all that brass and copper, and so did the rendering of the modern Mercer," Hartley told Lamm. "So we said, 'All right, let's plan to build that one.'"

From Caroll Shelby the Exners ordered a bare Cobra chassis, all tubes, and a Ford V-8, which were shipped to bodybuilders Sibona-Basano in Torino, Italy. Sibona had broken away from Ghia, where he must have known Exner from the Chrysler-Ghia show car days, but he had been recommended specifically by designer Brooks Stevens.

The copper-accented dash was striking and attractive.
PIL

"Sibona-Basano was a funny kind of place," Stevens said later, "with chickens running around the yard and junk everywhere. But they did wonderful bodywork and they charged much less than Ghia." Concurrently, the Italians were working on several Stevens prototype proposals for future Studebakers.

Hartley's Copper Association helped supervise the project and provided all the cupriferous metals that went into its trim: 11 different types to demonstrate color possibilities, including conventional copper alloys like brass (copper and zinc mainly) and bronze (copper and tin). The body and chassis were conventional steel.

The Copper Development Association displayed the Mercer-Cobra for a decade, but most of its ideas were rendered obsolete by the development of more modern, man-made materials, encouraged by government crash-protection standards. But the Mercer-Cobra is still distinctive today -- and still very much in the Exner design tradition.