The Mustang I Two-Seat Concept Car 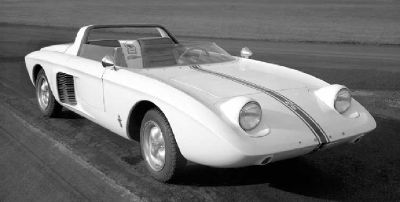 A fully operable model was built in 1961 for publicity and to test public reaction.

Just as chairman Lee Iacocca got Ford rolling on an effort for a sporty, affordable car, other Ford hands were finishing up a very different think-young car, the Mustang I. Petite and curvy, this open two-seater borrowed a front-wheel-drive powertrain from Ford Germany's mainstream Cardinal/Taunus sedan but put it behind the cockpit. Lead designer John Najjar suggested this mechanical format, then becoming de rigueur for racing cars. He also came up with the horsey name.

Though simply a what-if exercise at first, the Mustang I impressed design vice-president Eugene Bordinat. As it happened, Bordinat wanted a newsworthy "bell-ringer" for Ford's autumn-1961 new-model press preview and ordered that Mustang I be transformed from clay-model dream to drivable reality.

Riding a trim 90-inch wheelbase, the Mustang I measured 154.3 inches long and barely three feet tall at its highest point, a racy built-in rollover bar. Curb weight was a feathery 1500 pounds, so although the small, 1.5-liter German V-4 engine was tuned for only 90 horsepower, the car could do 0-60 mph in a brisk 10 seconds while squeezing out up to 30 mpg. Predictably, Mustang I was polo-pony agile, thanks to the low weight, a ground-hugging stance, and sophisticated European-style all-independent suspension.

The Mustang I was not only Dearborn's first true sports car, it was very innovative and thus quite unexpected from tradition-bound Detroit. Jaded reporters pleaded for a ride at the new-model preview, then went home to write glowing stories. The public didn't get to see Mustang I in person until October 1962, when race driver Dan Gurney drove it around the Watkins Glen circuit in New York before the start of the U.S. Grand Prix.

Sports-car purists raved about the Mustang I, but Ford deemed the car too costly and impractical to produce.

For a time, there was talk that Ford would build Mustang I for sale, and Najjar's studio devised a larger windshield, door windows, and a lightweight removable hardtop with that possibility in mind. But as Iacocca later told the press, Mustang I never had a chance.

Where sports-car purists saw a dream come true, Ford's market-savvy chief saw a car that would be costly to produce. He also knew that a tight two-seater with hardly any luggage space would be tough to sell in sufficient numbers to return a sizable profit. "That's sure not the car we want to build, because it can't be a volume car," he declared. "It's too far out." Exit Mustang I.

As 1962 rolled on, such key points as the number of seats, the price target, and especially the car's name were still very much at issue. Learn on the next page where these early experiments into a sporty new car would lead Ford, and young America.