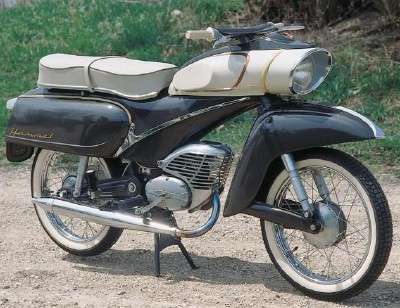 When the 1965 DKW Hummel 155 motorcycle was introduced to the public, the European motoring press dubbed it the "Tin Banana." Its appearance was indeed a radical departure from any contemporary bike's.

DKW, "Das Kleine Wunder" (the little wonder), began assembling powered cycles in 1919, and in 1932 became a partner in the Auto Union conglomerate.

Most of DKW's earlier units were built with engines of at least 98 ccs of displacement, but they were always two-stroke designs.

In addition to the swoopy, avant-garde body work of the Hummel, the motorcycle set itself apart from the competition by having a three-speed gearbox. With only a 50-cc engine producing 4.2 horsepower, the 155 was able to cruise at 45 mph.

This example is fitted with a conventional foot shifter, though a hand shifter was available as an option.

The styling might have been a big hit in the U.S., but the Hummel was never exported. Being readily available across Europe was not enough to elicit strong demand, and it never sold in great numbers.

Go to the next page for more pictures of the 1965 DKW Hummel 155 motorcycle. 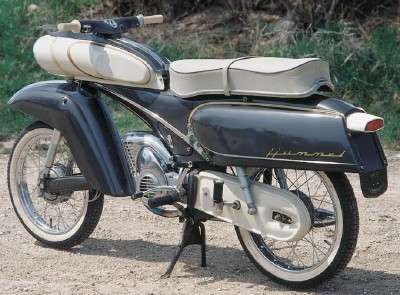 "Tin Banana" nickname didn't do much for 155 sales.

Called the "Tin Banana" by the European press, would the 1965 DKW Hummel 155 motorcycle never sold well in Europe. Would it have been a sales success in the United States?

The front suspension used an Earles-type fork.
The face shield for the 50-cc engine looked medieval.
The headlight nacelle was DKW's idea of aero styling.