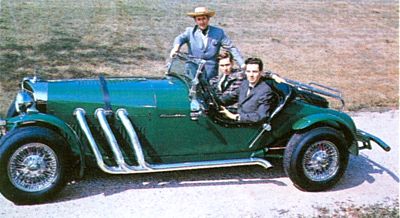 Many "replicars" have come and gone since the mid-1960s, so it's fitting that the first and best of the breed -- the 1965-1969 Excalibur Series I -- would survive the longest. It was the splendid creation of noted industrial designer Brooks Stevens.

The first Excaliburs were lightweight race-and-ride roadsters built in 1951 with "vintage-modern" bodywork on the Henry J chassis, but the production Excalibur was born in 1963 at Studebaker, where Stevens had been a consultant the previous four years.

Having completed clever, low-cost face-lifts on the compact Lark and sporty Hawk coupe, he was asked by company president Sherwood Egbert to come up with some show cars to convince people that moribund Studebaker had a future after all.

At first, time permitted only a trio of dolled-up Larks. But for the annual New York Auto Show in April 1964, Stevens wanted something that would really "get people to come to that damn booth." Egbert, sadly, was stricken with cancer by then, but successor Byers Burlingame agreed to go along.

Stevens devised what he called a "contemporary classic," a new car that looked like the supercharged Mercedes SSK he once owned. Badged "Studebaker SS," the dashing cycle-fendered roadster, riding a Lark Daytona convertible chassis with supercharged, 290-horsepower 289 V-8, was completed in just six weeks by Stevens and his sons David and William.

No sooner did it arrive in New York than Studebaker backed out, officials saying it was at odds with their new "common sense" theme. Undeterred, Stevens exhibited the SS on his own, and immediately drew an avalanche of orders.

This prompted his sons to form SS Automobiles in August 1965, and within a year they'd built 56 examples of a modified SS bearing the Stevens-registered name Excalibur -- and "sword-in-circle" radiator mascot that suggested, but didn't infringe upon, Mercedes' jealously guarded tristar emblem.

Studebaker, meantime, had ceased production, but the Stevens brothers secured 300-bhp 327 V-8s from Chevrolet that gave their lithe, 2,100-pound Excalibur exhilarating performance. With standard 3.31:1 rear axle, 0-60 mph took less than five seconds, versus seven for the Studebaker-powered prototype. And projected top speed was near 160 mph!

Continue reading to learn more about the 1965-1969 Excalibur Series I.

Though quite old, the Lark chassis was narrow and thus literally suitable for the slim body of the 1965, 1966, 1967, 1968, 1969 Excalibur Series I. It was also firmly X-braced, though the high power-to-weight ratio demanded considerable reworking for good handling.

That task fell to David Stevens, as did numerous others. The vintage-style cowl, for example, forced him to lower pedals and steering column. He also had to change spring rates and caster/camber angles, but the car went as quickly around curves as it did on straights.

This chassis continued under all "Series I" Excaliburs. For 1970's revamped "Series II," young Stevens designed a new box-section frame with all-independent suspension.

Early production Excaliburs were bodied in hand-hammered aluminum, but fiberglass was soon substituted for reasons of cost and practicality. Radiators, though, were always cast in aluminum, and the dash was filled with purposeful white-on-black gauges in an engine-turned panel. All this in a hand-built car with sensational performance and secure roadability made the announced $7,250 base price simply unbelievable.

Buoyed by their initial success, the Stevens brothers added two models in 1966: a more elaborate roadster with full fenders and running boards, and, very late in the year, a surprisingly roomy four-place Phaeton convertible.

Prices inevitably escalated, reaching $10,000 by 1969, but Excaliburs remained remarkable values. Not until 1976 would prices exceed $20,000, and then mostly because of inflation and government mandates, though a progressively upgraded equipment list no doubt added to the total.

The Excalibur survived the 1970s through Series II and III models that picked up where the Series I left off. Then came larger and slower Series IVs, which piled up big losses in a topsy-turvy market, forcing the Stevens brothers to sell out in the late 1980s.

New owners tried to keep things going, but the firm slipped into the limbo of bankruptcy in 1991.

Continue reading to learn more about the Excalibur Series I specifications.

Later models of the Excalibur Series I became bulky as they were aimed more for the luxury market.
©2007 Publications International, Ltd.