After three successful years, the 1965-1968 Pontiac Grand Prix entered a four-year sales decline that reflected a general decline in the car itself. Actually, there was nothing wrong with the 1965-68 models that a visit to Weight Watchers wouldn't fix, and if more glitter and gadgets were evident, so was more power that enabled performance to remain respectable.

These GPs were clearly less special than the handsome and balanced 1962-64s, a fact evidently not lost on the public. From a high of 12.4 percent for 1963, Grand Prix skidded to just 4.4 percent of total Pontiac sales by 1966 -- a record year for the division as a whole. The '68 figure was an equally lackluster 4.6 percent.

This fall in fortunes largely stemmed from two related factors: the advent of mid-size performance cars like Pontiac's own GTO, and a consequent waning interest in sporty big cars like the Grand Prix. Price was not a factor. Despite a bigger, all-new design, the '65 base-priced a dollar less than the '64 -- exactly $3,498 -- and by '68 the sticker was up by less than $200 despite interim inflationary pressures.

Inflated certainly described Pontiac's '65 styling, which contrived to make its wares seem much larger than any dimensional gains suggested. Indeed, GP wheelbase was stretched only an inch, to 121, and just 1.6 inches were added to overall length, though the resulting 214.6 inches were hardly what one would call trim. Curb weight was little affected, too, remaining at just under two tons.

Nevertheless, the '65 GP and its cohorts looked like bodybuilders on steroids: bulged and billowed all over the place in the curvy, humped-fender idiom GM hoped to popularize. About all that remained of previous Grand Prixs were the trademark split-theme grille, stacked quad headlamps, discreetly hidden taillamps, and unique roofline with concave rear window.

Happier news awaited underneath. Like GM's other B-body full-size cars that year, the '65 Pontiacs adopted a stronger new full-perimeter chassis that was more resistant to side impact damage than the previous X-member design.

Another advancement came as the old never-liked Roto Hydra-Matic transmission gave way to the vastly superior new Turbo Hydra-Matic with enlarged torque converter. Engine choices still comprised a quartet of 389s and a trio of big-block 421s, but power ratings were up across the board. The standard 389, for instance, gained 22 horsepower for a total of 325, and 421s offered up to 376 with optional Tri-Power carburetion.

Helped in no little measure by the new automatic, the base-engine '65 proved quicker than its '63 counterpart by nearly three seconds in the 0-60 dash, according to Motor Trend -- a 27 percent improvement. Braking suffered, though -- by a substantial 44 feet in 60-mph "panic" stops.

Other things suffered, too. A bench seat was standard in lieu of buckets, which now cost extra, and upholstery switched from vinyl to cloth. In short, the GP was turning from sports-luxury to personal-luxury. But Ford's Thunderbird and Buick's Riviera were knocking each other over for king of that hill; GP evidently wasn't seen as a contender.

Despite Pontiac's best intentions, sales of the 1965-1968 Grand Prix were rather lackluster. Go to the next page to find out more.

The 1966 Pontiac Grand Prix was little changed from the 1965 models, save for a mild facelift.
©2007 Publications International, Ltd.

Disappointing sales figures plagued the 1965-1968 Pontiac Grand Prix. Despite Motor Trend "Car of the Year" honors to Pontiac -- and record division sales -- the '65 Grand Prix garnered some 6,000 fewer orders than the '64.

The '66 generated less than 60 percent of '64 volume -- and the aforementioned 4.4 percent of total Pontiac sales. The main change that year was an attractive, muted facelift of the somewhat exaggerated '65 look.

Sales improved to nearly 43,000 for 1967, when a full lower-body re-skin conferred a hulkier look again, dominated by a massive bumper/grille with Grand Prix's first hidden headlamps. Wipers were also hidden, and there was heavy sculpturing around the rear wheels.

Federal smog standards were looming, so engine selections were reduced to four: a pair of 400 V-8s and two stroked 428s, all sharing new block and head designs conceived with lower emissions in mind. Power was still plentiful, though, ranging from a 265-bhp "economy" 400 to a 376-bhp 428. But the big '67 news was the first-and last-Grand Prix convertible. Though attractive and eminently desirable, it cost $264 more than the mainstay hardtop coupe, which was not chicken feed then, and fewer than 6,000 were called for, only 13.7 percent of GP sales. To no one's surprise, it did not return for '68.

The most
©2007 Publications International, Ltd.

The hardtop did, of course, but yet another lower-body restyle rendered looks debatable. The big bumper/grille was even bigger, side sculpturing more radical, and the rear end became massive and Buick-like. Even Pontiac engineer Bill Collins later called the '68 GP "a disaster, Nobody bought it. It looked like a big fat turkey." Maybe so, but it was not unpalatable to Car and Driver: "The performance and roadability . . . are excellent. Only its size and weight keep the Grand Prix from being a Super Car."

But sales were again anything but super -- the lowest since debut '62, in fact. A new Grand Prix with more of the original spirit was clearly needed. And that's precisely what Collins and company delivered for 1969.

Read about the engine and mechanics of the 1965-1968 Pontiac Grand Prix on the next page. 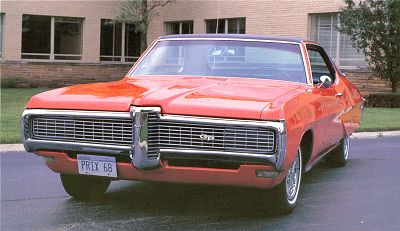 The facelifted 1968 Pontiac Grand Prixs would be the last of the full-size models, scoring fewer sales than any Grand Prix since 1962.
©2007 Publications International, Ltd.