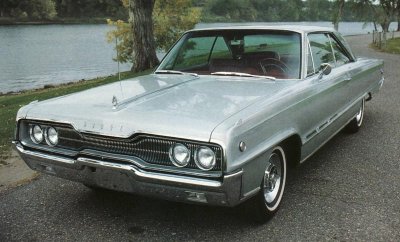 For 1966, the "barbell" effect of the Monaco 500's grille became more pronounced, and a forceful speedline thrust forward from the front wheel openings. Round "500" medallions and the three faux vents on the bodysides were Monaco 500 traits.

Names aside, the 1966 Dodge Monaco 500 was easily the handsomest of the big 1966 Dodges. This vehicle had a cleaner line, too, as the upper-body molding gave way to a simple fine-line paint stripe available in four colors. Circular "500" medallions (shared with Polara 500s) appeared on the front fenders, and smoother new full-length rocker moldings turned up at the front to match the bumper. A trio of slim chrome oblongs filled with black paint suggested louvers on the lower front fender and door.

It was still a striking interior, but some "thrifting" occurred as the rear buckets gave way to a conventional three-passenger bench seat, which dictated a shorter, redesigned center console. "After Townsend grew more confident," former Chrysler planning executive Gene Weis remembers, "Product Planning came under tremendous pressure to reduce costs." There were several new options for the 1966 Dodge Monaco 500, however, including six-way power seat and a tilt/telescope steering wheel.

Deep-dish wheel covers were also new for the 1966 Dodge Monaco 500, but they were shared with Polara 500s and the 1966 Charger -- and they were only covers as opposed to the Grand Prix's aluminum wheels. Although the studio had designed a unique Monaco 500 cover with a die-cast "sunburst" applique, it was canceled before production. (The design resurfaced on the "spring special" Sundance trim package for the 1974 Plymouth Satellite Sebring.)

The 1966 Monaco 500's taillights were more pronounced versions of the delta-shaped lamps first seen on the 1965 Dodge Monaco. The base price of the Monaco 500 rose by about $250 over that of its 1965 counterpart.

The stylists at Dodge continued to innovate and evolve their car designs throughout the 1960s. Learn more about Dodge design in the middle of the decade on the next page.