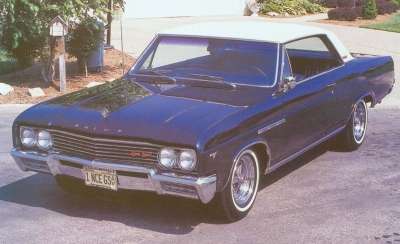 The sales leader of the 1955 Buick Gran Sport was the two-door hardtop, with more than 11,000 orders.

Stuffing the big V-8 engine into the Skylark was a challenge in the 1965 Buick Gran Sport design for a number of reasons. According to Dennis Manner, who was in charge of Buick engines at the time, "We had to make changes." Specifically, the exhaust manifold had to be rerouted around the Skylark's frame.

"The spacing under the hood was cramped because of the width of the engine," Manner added. "We made the manifold longer and gave it a different configuration. There was special shielding for the starter because of the heat, and the accessory drive with the options was changed. The throttle linkage was specific to the vehicle and there was a specific air cleaner."

In the Gran Sport, the Wildcat engine had a single four-barrel Carter AFB carburetor and 10.25:1 compression ratio. A dealer-installed dual four-barrel setup was available. With it, horsepower rose to 338 and torque also went up to a whopping 465 pound-feet.

The Gran Sport engine also used a different oil sump and pan. "Buick had different sumps and pans because of the different chassis they produced," said Manner. "There was no significant power change" with the modifications, he added. "There was a bigger problem keeping the rear wheels on the pavement." After all, the standard engine in the 1965 Skylark was a 225-cid V-6 that pumped out a sedate 155 horses. The Wildcat V-8 offered more than double that power rating.

The 1965 Gran Sport could be dressed up with accessories like a vinyl top and wire wheel covers.

Called the "nailhead" by hot rodders because of its relatively small valves, the Wildcat 445 V-8 was descended from the division's first ohv V-8 of 1953. It was a good engine for Buick. It was relatively light and offered lots of torque -- 445 pound-feet, which is where the numerical part of its name came from. What the Gran Sport engine ceded to the GTO powerplant in terms of horsepower it made up for in torque.

"The exhaust valve was smaller than normal for that engine," added Kunz. "It was too small. But we kept it open longer. We used overlap with the cam. If a valve's a little small, you just start [opening it] a little early and hold it open longer. The inlet valve was closer to normal size."

"Buick cars were typically heavy because of their high option content," said Manner. "We concentrated more on torque than horsepower because of the heavy weight. It didn't help with NASCAR, but on roads and freeway ramps it was great. Torque is what moves the car. It had a lot of torque for a relatively light engine."

For more on the 1965 Buick Gran Sport, continue on to the next page.