Press Reaction to the AMC Marlin 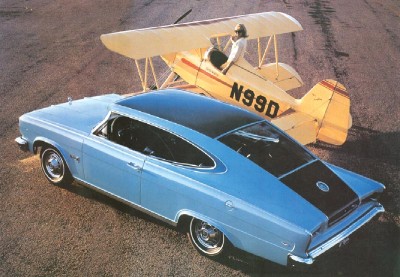 The 1966 Marlin offered a black vinyl-covered roof as an option.
©2007 Publications International, Ltd.

Press reaction to the AMC Marlin was mixed, with many writers praising its dual master cylinder braking system and the striking interiors. The San Francisco Chronicle called it an "extremely fine road car . . . cruises with the slightest strain at 80 mph." The Camden, New Jersey, Courier-Post said the Marlin was "beautifully styled with refinements not typical of fastback models."

Motor Trend, which had named the 1963 Rambler its "Car of the Year," observed cautiously, "A very well balanced car that rounds out the various types of personal performance sports cars on the market." The Indianapolis News opined that "American Motors Corp. shook the car buffs out of the bushes with the Rambler Marlin, newest mid-year model to be offered to sports-minded motorists."

It remained for Automobile Quarterly, the hardbound no-advertising publication that usually limits itself to praising the virtues of limited-edition classic cars of earlier eras, to take the Marlin to task with a vengeance. Malcolm J. Brookes called the Marlin "the ugliest vehicle yet to come from Detroit." He berated its "disagreeable shape," its "inadequate rear-view window," poor location of the steering wheel and stoplights, front seats that were too soft, and poorly designed pedals.

Well, it wasn't that bad -- the 10,327 Marlins produced in 1965 helped generate a profit of $5.2 million for the corporation that year, despite a three-week strike by the United Auto Workers in AMC's fourth quarter Worldwide, Rambler sales came to 412,736 units. (Of this total, by the way, Ambassador convertibles accounted for 3,499, Classic ragtops for 4,953 -- hardly resounding proof that open models in all series would help overall sales.)

As American Motors moved into its 1966 fiscal year, the company appeared headed for trouble. Sales of automobiles were weak industrywide, and losses loomed at AMC. In June, Robert B. Evans was named chairman of the board, replacing Cross, who continued as a director and chairman of the executive committee.

The 1966 Marlin bore only minor changes. Public relations was hard put to stimulate excitement with such changes as modification of the extruded aluminum grille, sway bar added to six-cylinder models, and a black vinyl-covered roof as an option. In a ploy to stimulate sales, the price was lowered to $2,601 by deleting previously standard features, such as the power brakes, and the Rambler name was taken off the back of the car.

It didn't matter, as only 4,547 Marlins were built for the model year. Total AMC car production likewise sank -- to a disappointing 279,225 -- and the company reported a loss of $12.6 million for the fiscal year. As the year ended in September, Roy D. Chapin, Jr. was promoted to executive vice-president and general manager of the automotive division.

The following year, the 1967 AMC Marlin went through a restyling. Continue on to the next page to learn more about the changes.