Plymouth's full-size line was redesigned for 1965 with stacked headlights and straight-edge styling on a longer wheelbase.
©2007 Publications International, Ltd.

Chrysler's breadwinner learned a hard lesson in the early 1960s that might be summarized by paraphrasing an old adage: "If you can't beat 'em, rejoin 'em." Plymouth quickly regrouped and came up with the 1965-1966 Plymouth Sport Fury and VIP.

Plymouth's shrunken 1962 standards were no sales match against full-size Chevys and Fords. Neither was their oddball styling, though that became more orthodox for 1963-1964.

But by that time, a new team of designers and managers had seen the errors of their predecessor's ways and had decided to put the mainstream Plymouths back into the mainstream -- with a vengeance.

The result was a hugely successful line of "Roaring '65s." Not only was it the broadest lineup in Plymouth history, it featured true full-size cars for the first time in four years. Fittingly, those new big ones were called Fury, a name familiar from recent top-line Plymouths.

Motor Trend described the new order this way: "If corporation executives felt nervous about Plymouth's lost market penetration -- if they blamed this loss on the car's looking a little different -- they need worry no longer. Their designers have aptly taken up most of the clichés that helped their rivals. . . .

In size and appearance as well as target market, the reborn big Plymouth was both Chevy Impala and Ford Galaxie. It exactly duplicated their 119-inch wheelbases (121 for Fury wagons) and came within fractions of an inch of their other dimensions.

Model choices were similar, too. Fury I and II were available in two- and four-door sedans and four-door wagons. Fury III omitted the two-door but added a hardtop sedan, hardtop coupe, and convertible; the last two repeated as bucket-seat Sport Furys.

Go to the next page to learn about 1965-1966 Plymouth Sport Fury and VIP styling. 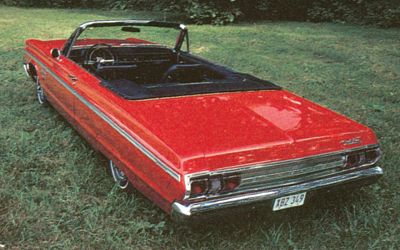 All 1965 models carried the Fury name, but the flagship of the fleet was again the Sport Fury, featuring fancier trim, buckets-and-console interior, and a standard 318-cid V-8.
©2007 Publications International, Ltd.

Styling for the 1965-1966 Plymouth Sport Fury and VIP somehow blended 1965 Ford and Chevy. Of course, Elwood Engel and his Highland Park design crew couldn't possibly have seen those cars in advance, yet they came up with stacked quad headlamps, as on Ford's new 1965 face, and Chevy-style back panels with single (I, II) or double (III and Sport Fury) taillamps.

That foundation remained of unibody design but with a front subframe as in 1960-1961 (for easier noise and vibration control), not full-unit construction as on Plymouth's 1962-1964 "standards."

Powerplants were the usual corporate array, ranging from 225-cid Slant Six through 318 and "Commando" 383 V-8s up to a big 426 wedge with 365 horses. Three-on-the-tree manual was standard, but Plymouth Fury buyers generally opted for TorqueFlite automatic, which now lost its hallowed pushbuttons for a conventional column shift.

Motor Trend mourned the pushbuttons' passing, the result of a marketing study. "We've never talked to anyone who's driven with buttons who'd care to go back to the column-mounted lever. Floor-mounted, yes -- but column, no! At least the TorqueFlite hasn't been changed. It's still the most positive shifting of any automatic on the market."

As in every year since 1962, the Sport Fury was Plymouth's flashy flagship, with standard 318 V-8 and buckets-and-console cabin. But the 1965s sold better than any Sport Fury before.

The $3,209 convertible, the year's priciest Plymouth, almost doubled in sales over 1964, while the $2,960 hardtop increased 160 percent to become the fifth best-selling Fury model. Symbolizing these winning ways, a ragtop Sport Fury paced the 1965 Indy 500, the first Plymouth so honored.

Plymouth scored another first for 1965: record model-year production of more than 720,000 units. Significantly, the Plymouth Fury line generated almost half of that total. Plymouth's 1966 model-year sales were lower, volume easing to just under 684,000 as the industry took a breather after super-hot 1965.

Furys received a minor facelift for 1966, with a slightly fussier split-theme grille and back panel. Changes were otherwise few, but front/rear seatbelts, padded dash, and "safety" inside door handles appeared at Washington's insistence, and a new wedgehead 440 V-8 replaced the 426 as the top power option, (though it had the same rated power).

Sales weren't great - Caprice attracted something like 25 times more - but sufficient enough that the Fury VIP would hang around a few years, though not as long as the Sport Fury.

Check out our final section to see specifications for the 1965-1966 Plymouth Sport Fury and VIP.

Featuring true full-size cars for the first time in a few years, the 1965-1966 Plymouth Fury offered the broadest lineup in the automaker's history. Find specifications for this successful car below.