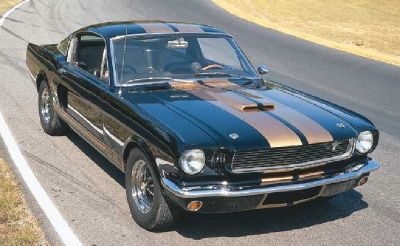 As a small manufacturer, Shelby American didn't observe strict model years, generally making changes only after parts in stock were used up. As a result, there's no "official" distinction between the 1965 and '66 GT-350s.

However, the first 262 cars designated as '66s were actually leftover '65s retrofitted with the thin-bar grille (also sans "corral"), rear-brake air scoops behind the doors, and Plexiglas windows replacing the roof vents. Subsequent '66s got slightly softer damping and other suspension tweaks, plus the new options of automatic transmission and the stock fastback's fold-down rear seat. Paint colors expanded to red, blue, green, and black, all with white stripes.

More typical of ol' Shel was a Paxton centrifugal supercharger option, available factory-installed for $670 or as a $430 kit. Boosting horsepower by a claimed 46 percent to more than 400, it cut the 0-60 dash to around five seconds. Few were sold, however, and the option was dropped after a single season.

Ford took 936 GT-350H models in 1966, a big boost for Carroll Shelby, but abandoned the unintentional rent-a-racer after one year.

In another interesting move for '66, Carroll concocted the GT-350H -- "H" for Hertz Rent-A-Car. Exactly 936 were built, all finished in black with gold striping and equipped with Select-Shift Cruise-O-Matic. Hertz rented them for $17 a day and 17 cents a mile. Weekend racers eagerly lined up, but their unauthorized track outings made the venture a mite unprofitable, and Hertz bailed out after just one year.

In all, Shelby built 2378 GT-350s to '66 specs, including R- and H-models, plus six prototype convertibles. But profit-minded Ford wanted far more and was starting to pressure Carroll to water down his original concept even more.

Brilliance Bound To Be Copied

Up to now, Ford's spectacularly successful pony car (a term coined by Car Life magazine) had only one direct competitor: the Plymouth Barracuda, a sporty Valiant-based "glassback" that by pure coincidence bowed a month after Mustang. As a Plymouth and a less "special" sportster, Barracuda proved no sales threat.

Privateers and Ford itself fielded wild Mustang dragsters in 1966, as competition was about to emerge.

But Ford knew that archrival Chevrolet was bound to copy Mustang -- probably sooner rather than later. Indeed, many journalists had predicted a whole slew of competitors inspired by Mustang's winning formula. After all, it's axiomatic in Detroit that a hot-seller doesn't go unanswered for long.

But Dearborn had more extensive changes in store for the 1967 Mustangs. The only question was, would they be enough to keep the original pony car ahead of the expected imitators? In the next section, we'll explore how Ford worked to keep Mustang ahead of the pack, and whether it was successful.