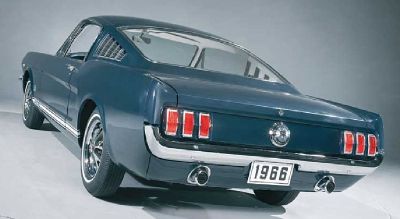 Separate taillamps showed up on prototype '66s in press photos but didn't make production, to hold down prices.

Typical for a new car in its second year, the 1966 Mustangs weren't greatly changed -- not that they needed to be with sales roaring along.

Designers had always wanted three separate taillamps per side instead of a cluster, but though some '66 press photos showed this, the idea was again rejected on cost grounds. Ford did splurge on interiors, though, adding new seat and door trim and, with a nod to Congress, then starting to grumble about auto safety, standard padded dash and sunvisors. It also gave all models the five-dial GT instrumentation in place of the original cluster with its strip speedometer.

Six-cylinder cars went from 13- to 14-inch standard wheels and tires, and all models got new engine mounts to reduce vibration. Engine offerings carried over from the "true" '65s, but options expanded again with the addition of 8-track stereo tape player ($128) and deluxe seatbelts with reminder light and inertia-reel retractors (about $8).

Ford pushed six-cylinder Mustangs more heavily for '66, in part to keep sales going during a temporary shortage of V-8s that occurred during the model run. Highlighting this effort was the Sprint 200, advertised as the "Limited Edition," announced in spring 1966 to mark the first million Mustangs built and sold.

The Sprint 200 was basically a package available for any body style, though most were built as hardtops. The 200-cubic inch six (hence the name) was given a chrome air cleaner with "Sprint 200" decal. Wire-look wheel covers, center console, and bodyside pin striping were also included. In all, it was an attractive package for any buyer, though Ford pitched it mainly to women.

Though six-cylinder Mustangs looked like V-8 models at a glance, there were some technical differences. Chief among them were four-lug wheels instead of five-bolt, nine-inch drum brakes versus 10-inch diameter, slightly narrower front track, a lighter rear axle, and lower spring rates.

There were two other reasons to push sixes for '66. As one Ford executive said later, "We felt there was a need to emphasize the economy aspect at that time. Also, the six-cylinder coupe was by then the only Mustang selling for less than Mr. Iacocca's original target figure."

The '66s did get slighty tidier styling around the nose but were otherwise hard to tell from the '65s at a glance.

Predictably, model-year 1966 sales were down on extra-long '65, but for comparable 12-month periods the '66s actually ran ahead by 50,000 units. Model-year sales kept galloping along at close to half a million hardtops, 72,000 convertibles, and 36,000 fastbacks.

Mustang reminded many of certain European tourers, so it was fitting that the car started sale in Germany during 1966. But it couldn't be a Mustang in the land of Bimmers and Benzes, because a local company already owned the name and wouldn't give it up. Accordingly, Ford substituted badges reading T-5, the code name of the original development program, and removed all other "Mustang" labels, though the powerful steed still appeared on the grille and steering wheel.

The cars were otherwise all-American except for minor changes needed to satisfy German regulations. Interestingly, German T-5 Mustang sales would continue until the late 1970s.