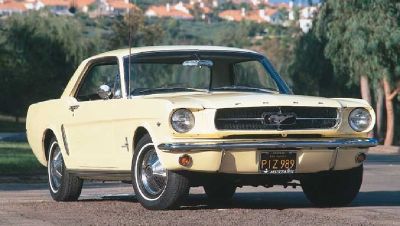 Mustang caused more buyer excitement than any Ford in a generation. Terrific styling was one big reason.

Though the original 1965 Ford Mustang used many Falcon components to achieve a low base price, the new coupe was rather more than just a slicker version of the workaday compact. Of course, Mustang looked far sportier than the Falcon. But it also ushered in an era of automotive personalization that was key to its success.

Sure, Lee Iacocca, the "father" of the Mustang, and the engineers he directed liked to talk of significant mechanical and technical advancements in "weight control" made possible by "platform construction," basically a modified unibody.

As one brochure stated: "The Mustang with its galvanized structural members and torque boxes is designed for strength and rugged support of both chassis and body components. The uninterrupted tunnel which runs straight through the center of the platform from the toe-board to the rear axle kick-up gives firm support, and the whole structure is reinforced by a practical use of ribs and reinforcements." Even so, the convertible required quite a bit of additional bracing to keep body flex tolerable.

More obvious was how dressy even a basic Mustang seemed compared to the typical Falcon, thanks to standard front bucket seats, vinyl interior, full carpeting, and full wheel covers. As planned, the "starter" powerteam comprised the 170-cubic-inch Falcon inline-six-cylinder engine sending 101 horsepower through a three-speed manual floorshift transmission. It was a good combination, capable of returning up to 20 mpg. But who cared when gas cost a quarter a gallon? A car this sporty just had to have a V-8.

Even no-frills models were quite dressy, as vinyl bucket seats and carpeting were all included.

Except for the HP V-8, all Mustang engines could be ordered with a three-speed manual transmission, a Borg-Warner T-10 four-speed manual ($116 for sixes, $76 for V-8s), or Ford's three-speed Cruise-O-Matic automatic ($180/$190). The four-speed was a "mandatory option" with the HP, a profit-boosting tactic then popular in Detroit.

All Mustang V-8s used the efficient "thinwall" design inaugurated for 1962 with the 221-cubic inch Fairlane unit. The nickname referred to the advanced casting techniques employed to make these engines the lightest iron-block V-8s in the industry.

For those who didn't order (or couldn't get) the HP V-8 and later wished they had, Ford dealers soon offered a slew of bolt-on performance enhancers. Many were marketed under the Cobra banner, a canny move, as the same basic engine already powered Carroll Shelby's fierce Cobra sports cars, already making their mark. As one ad urged: "Mix a Mustang with a Cobra for the performance rod of the year!"