by the Auto Editors of Consumer Guide
Next
The 1965-1966 Chrysler 300 2D Hardtop and Convertible were the sportiest of the first Chryslers styled by Elwood Engel. Engel replaced Virgil Exner as Highland Park design chief in 1962, and repeated many of the design hallmarks he'd used at Ford -- mainly squarish contours and chrome-edged fenderlines.

The non-letter 300 was the mid-range series as before, offering a hardtop sedan and a (likely export-only) pillared four-door, in addition to the customary convertible and hardtop coupe. Like other Chryslers, they were longer and heavier than in 1963-64, but reverted from 413 V-8s to the smaller, corporate-mainstay 383.

When the letter-series departed after '65, these two-door 300s became the sportiest of all Chryslers, acquiring standard front bucket seats (previously optional) and a somewhat busy, minor facelift. 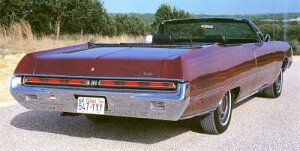