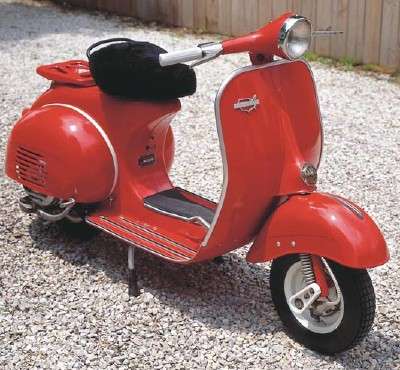 The 1964 Vespa Allstate Cruisaire motorcycle was the Sears-licensed version of the popular Italian scooter that is among those few transportation devices that have attained iconic status.

One of the most recognized name in scooters, "Vespa" is actually a model; the parent make is Piaggio of Italy.

Piaggio was established in the late 1800s as an engineering company and eventually expanded to include manufacturing.

By the late 1930s it was a large concern involved in numerous endeavors, including aeronautics and shipbuilding. But the company was ravaged during World War II, and afterward looked for a simple product to build that could get it back on its feet.

The need for personal transportation in postwar Italy prompted Piaggio to "think small," and the Vespa scooter was born.

Piaggio's Vespa was an instant hit, and within ten years, more than a million were produced.

So successful was the little scooter that numerous companies outside Italy sought licenses to produce it. One was Sears, the huge American retailer, which sold it under the Allstate brand.

The 1964 Vespa Allstate pictured differs little from the Italian original, though the engine displaces 125 cc.

Its three-speed transmission is shifted by rotating the left handgrip, and the single-sided trailing-link fork and swingarm rear suspension still allow for simple tire changes.

Though Sears only offers its Allstate model for a few years Piaggio and the Vespa remain alive and well. Though more futuristic-looking scooters are produced by the Italian concern, a retro version of the original Vespa is a perennial favorite in the company's product line.

Continue to the next page to see more 1964 Vespa Allstate Cruisaire motorcycle pictures. 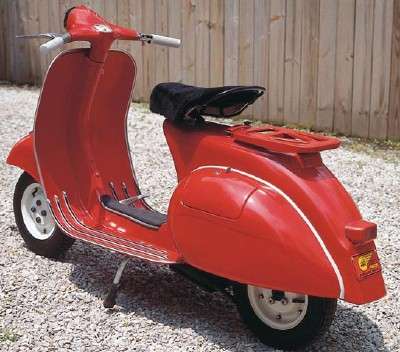 The 1964 Vespa Allstate differed little from the Italian original, though its engine displaced 125 cc not 90.

One of the Vespa Allstate's interesting features included the single-sided trailing link fork.
The single-sided trailing link fork allowed the tire to be changed by simply removing four wheel nuts.
Pulling in the left-hand clutch lever allowed the grip to be rotated to select gears.
The front brake is actuated by the right handlebar lever, the rear brake by this foot pedal.
The kickstart lever sprouts from beneath the right-side engine cover.