Standard Fairlanes were rather timid performers in 1964; the Thunderbolt was anything but. See more classic car pictures.
©2007 Publications International, Ltd.

Unlike most of the cars of the 1960s, the 1964 Ford Fairlane Thunderbolt wasn't ready for the street. Only a handful of 1960s fans have so much as seen a Thunderbolt in action, much less roared down a quarter-mile drag strip in one.

More than a few enthusiasts haven't even heard of this rarely spotted Ford, offered for just one year. That's because a Thunderbolt was about as far removed from a highway machine as anyone could get in the beginning of the performance era.

T-bolts were for dragging; that's all, nothing more. And they were created for professional race drivers whose only goal was to get to the end of a quarter-mile strip as fast as humanly possible.

One way to get there quicker has always been to take a lightweight car and drop in a beefy engine. Ford's Thunderbolt stretched that concept almost to its limit. Galaxies were going great around the NASCAR ovals, their considerable weight being offset by decent aerodynamics (for the time) and powered by the brutish High Riser 427-cid V-8. On the drag strips, though, Galaxies simply had too much heft to haul down the line.

With its 115.5-inch wheelbase, a Fairlane 500 measured three and a half inches shorter than a full-size Galaxie -- and weighed some 700 pounds less. Throw in a full collection of weight-cutting ideas, and the result could be promising indeed.

A few drag racers, in fact, were already running experimental Fairlanes. At Dearborn, the corporate folks didn't object to the idea of another winning Ford. This was the age of Lee Iacocca, after all, and motorsports were a major part of his program.

An initial batch of cars was ordered from the Dearborn Steel Tubing Company, near Ford headquarters, followed by two more groups delivered later; yet the total came to only a hundred Thunderbolts, most of them painted Wimbledon White. No wonder they're so little known.

Stuffing that 427 into position wasn't easy, demanding an extensive reworking of the front suspension, and refabrication of major components. Cutting weight was the order of the day, starting with the use of fiberglass for the car's pinned-down bubble-topped hood, as well as doors and front fenders.

Early T-Bolts wore fiberglass front bumpers, but aluminum went into later cars in response to a ruling by the National Hot Rod Association. Plexiglas filled rear and side window openings, but the windshield remained stock.

Continue reading to find out more about how the 1964 Ford Fairlane Thunderbolt performed.

Brutal and basic are perhaps the two words that best describe a 1964 Ford Fairlane Thunderbolt. Nonessentials were summarily dismissed: Thunderbolts contained no mirrors, sun visors, armrests, jack, lug wrench -- nothing that didn't contribute to its ability to blast through a quarter-mile distance.

Twin screens replaced the Fairlane's inner headlights, shooting great gulps of air to the carbs through huge flexible ducts. Apart from that change, the front end looked fairly ordinary. So did the bodyside, which kept its full-length Fairlane trim strip. Except for the massive hood bubble and lack of hubcaps, in fact, a quick glance revealed little about what lurked within.

Underneath, the 427 breathed through twin Holley four-barrel carbs and exhausted via equal-length headers. A 12.7:1 compression ratio contributed to the engine's official 425-bhp rating, but contemporary analysts estimated that it actually put out a hundred or so more horses.

As Hot Rod explained, a Thunderbolt was "not suitable for driving to and from the strip, let alone on the street." Warranties? Forget it. Every customer had to sign a waiver absolving Ford of any responsibility for either repairs or potential injuries. Buy a T-Bolt, and you're on your own.

Price for all this performance was $3,780 for a Thunderbolt with Borg-Warner four-speed, or an extra hundred if it carried the frequently installed three-speed automatic, adapted from Lincoln's transmission.

Regular Fairlanes, let's recall, started at $2,194. A few lucky folks got a T-Bolt for a buck, reports Thunderbolt expert Bob Trevarrow, because they qualified as favored customers.

Was it worth the cost? We're talking ETs (elapsed times) in the mid-11 second range here, with a T-Bolt ending its quarter-mile leap at 120 mph or more. Gas Ronda took the 1964 NHRA Winternationals prize by making the trip in 11.6 seconds, hitting 124.38 mph.

For those who revel in such goings-on, those are figures to make the mind dance with joy. At the same time, Thunderbolts set a sterling pace for Ford's "Total Performance" theme. 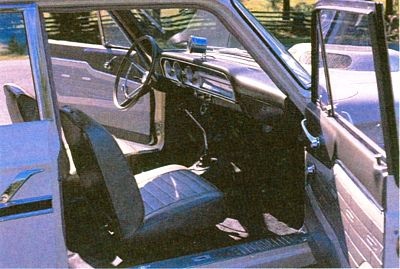 The 1964 Ford Fairlane Thunderbolt featured a stripped-down approach to design and accessories in favor of a more high-powered performance engine.