By 1964, a new age of high performance had dawned in America, marked not so much by a horsepower race as by a sophisticated balance between power, handling, and efficient design. Chrome and tailfins were out, bucket seats, mag-style wheels, center consoles, and floor shifters were in -- and just about everybody had them. With the 1964-1967 Pontiac Catalina 2+2, Pontiac achieved a combination of power, road-holding, and fine styling superior to any other big Pontiac, and most of the competition's models besides.

The 2+2 package was first offered as a $291 option on Catalina hardtops and convertibles in 1964. This money bought a potent 389 V-8 with 267-283 bhp, bucket seats, center console with vacuum gauge, special Morrokide interior, and unique exterior badges. Both a four-speed and Hydra-Matic transmission were available. The package was a trial balloon in 1964, and only 7,998 Catalinas were so equipped.

A year later, Pontiac applied the huge 421 V-8 as standard in the 2+2 package, with fender louvers and special hood/deck badges to identify it. Also included in the basic option was a three-speed Hurst floor shift, heavy duty shocks and springs, a 3.42:1 performance rear axle, chrome engine parts, full wheel discs, and fender pinstriping, details that raised the price of the package to $419 for coupes or $397 for convertibles.

Adding a four-speed transmission, the "Custom Gauge Cluster" with comprehensive needle instruments, and power brakes/windows/antenna brought the cost up to about $4,000 for the hardtop. The '65s had increased in size and weight, but the 2+2's potent drivetrain nevertheless provided terrific performance. With the optional Tri-Power 421 High Output engine and four-speed gearbox, a 2+2 could routinely reach 95 mph in the standing-start quarter-mile.

The 1964-1967 Pontiac Catalina 2+2 was highly touted for its powerful acceleration and smooth handling. Go to the next page to learn more about the Catalina 2+2's performance. 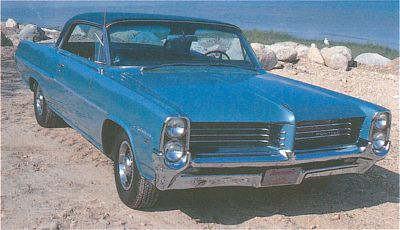 In 1964 2+2 was an option package for the Catalina that boasted bucket seats, console, special interior trim, and subtle exterior badges.
©2007 Publications International, Ltd.

The performance of the 1964-1967 Pontiac Catalina 2+2 models was highly praised. Bob McVay tried a 2+2 hardtop for Motor Trend, which gave Pontiac a blanket "Car of the Year" award in 1965. "Docile as a kitten in town, our 338-bhp charger turned wild when we put our foot down," McVay wrote, using the Royal Plural. "Our" foot gave 0-60 in eight seconds flat. "Equally impressive was the car's excellent passing acceleration and lugging ability in fourth gear, with 459 pounds/feet of torque available at 2800 rpm. . . This combination of a large-capacity engine in a relatively light body should prove an excellent tow car for the weekend racer or traveler. [But] as with any performance automobile, gas mileage wasn't anything to shout about. . . .The 2+2 is one of those rare machines that asks to be driven fast and well. A good driver can get a lot out of a car like this -- a lot of satisfaction and enjoyment in addition to performance."

Few changes occurred in 1966, except that the 2+2 was listed as an individual model, again as a hardtop or convertible. The identifying louvers were now moved to the rear fenders, and a Pontiac shifter replaced the Hurst unit. In 1967 the 2+2 was a Catalina package again, priced as usual around $400, but the base engine was now a 428 with a single four-barrel carburetor. The option included Deluxe wheel discs and steering wheel, Decor moldings, bucket seats, the three-speed, dual exhausts, and a heavy-duty stabilizer bar. A 428 HO engine remained available, but was not offered with Tri-Power.

For 1966, the 2+2 became a separate model bearing a mild facelift.
©2007 Publications International, Ltd.

According to John Gunnell's Pontiac Buyer's Guide, only 19,672 Catalinas had the 2+2 option from 1965 through 1967, and a breakdown of coupes vs. convertibles is not available. "The 1965s are the most highly sought after," Gunnell wrote, "even though they had the largest production." He goes on to call the 2+2 "Pontiac's top full-size collector car of this era." 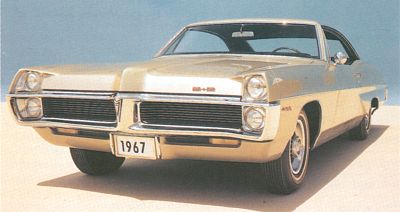 Behind the sleek exterior of the 1964-1965 Pontiac Catalina 2+2 lies a powerful engine and optimized mechanical components.