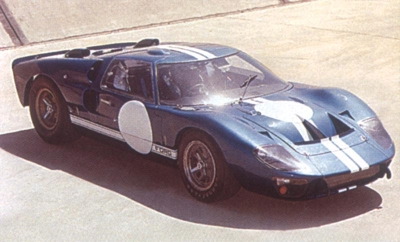 Other fundamental problems with the 1964-1967 Ford GT were coming to light that sent all and sundry back to the proverbial drawing boards. The Colotti gearbox used so far was, in Negstad's words, "junk." It simply could not deal with the torque of the Ford engine, and was failing regularly.

At least this non-Ford part could be used to take the blame for an even more fundamental problem: The 289-cid V-8 itself just wasn't up to the demands placed on it. To achieve the kind of performance the GT was capable of (Ginther had apparently seen something like 210 mph on the Mulsanne straight at Le Mans), the little powerplant had been overstressed; several of the well-publicized "gearbox failures" of 1964 and after were, in fact, fatal engine malfunctions.

Ford engineers started a new test program with some of their computer-savvy engineers (suspension guru Klaus Arning and Barney Larkin among them) during which a mathematical model of the Le Mans circuit was created. All possible performance variables -- tires, suspension, horsepower, and aerodynamics among them -- were assessed.

The team quickly found that top speed was the critical factor and began looking for ways to push the GT toward 250 mph. That was clearly beyond the "small" V-8, but another Ford engine, the 427-cid V-8 used in the company's NASCAR efforts, could churn out some 500 bhp for extended periods. This more than compensated for 120 or so pounds of extra weight it added to the already plump Ford GT.

A prototype was quickly built and taken to Riverside Raceway in California for testing by the Shelby American team. In a memorable back-to-back run against a 289 GT, the 427, with Tom Payne driving, was able to pull away easily from Ken Miles in the standard car. Miles broke off the test, took Payne's place in the 427, and went out for some laps on his own, reporting at the end of them that "this is the end of the 289."

While development work on the Mark II 427 progressed, a Ford GT won the 1965 24-hour race at Daytona; another finished second in the Sebring 12-hour event. But Le Mans turned out to be another dismal episode for the team, with the sole bright spot being another fastest race lap, set by Phil Hill (again) in a Mark II. Power (485 bhp when the engines were tuned to run on low-octane French fuel) was plentiful, if not quite enough to break the 250-mph barrier, but there were some engine problems, more of the expected failures of over-stressed gearboxes (now ZF instead of Colotti), and brake woes.