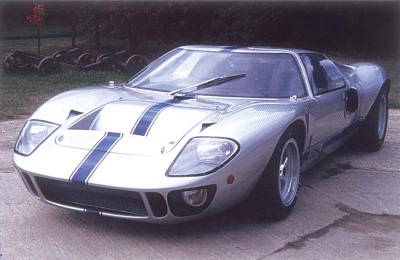 As a result of Ford's new policy on the 1964-1967 GT, Lola's role was given increasing prominence in print as time passed, even though Broadley himself had quickly grown tired of battling with Lunn and Wyer over design details. Shortly thereafter, he would bow out of the project and build the remarkable T70 racer on his own, and the GT would be an all-Ford show via an English subsidiary, Ford Advanced Vehicles.

"Factory" GTs would be run by Shelby American starting in 1965, FAV would become JW (John Wyer) Automotive that same year, and a host of private entrants would race Ford GTs at Le Mans and elsewhere.

But we're getting ahead of the story. The Ford GT's debut at the 1964 Le Mans test days was short and not especially sweet. French driver Jo Schlesser was the first to be bitten by the new Ford, losing one of the two cars in a big way on the long Mulsanne straight. He was uninjured; the car was not so fortunate. Not long after, Roy Salvadori went off the road in the second Ford GT with test-ending results. Officially, it was said that wet road conditions were to blame, but the real cause was far more serious.

Ford designers had created the Ford GT's body shape with the help of aeronautical engineers who had suggested an "inverted-wing" configuration. What no one seems to have considered at that moment is that aircraft can fly upside down in certain situations. So, too, could the Ford GT. This spooked the drivers. Worse, it spooked the FoMoCo executives who were supporting the program.

Haunted by visions of Ford GTs launching themselves into the hordes of spectators lining the track at Le Mans, the top brass in Dearborn ultimately decided to finish the 1964 race commitments with the cars listed as FAV entries and then hand the cars over to Carroll Shelby for the following season, not only because of his racing expertise, but also to have a front man for the effort in case of catastrophe.

The next leap forward for the Ford GT project was the Mark II. Its powerplant was the mighty 427-cid "side-oiler" V-8 that could crank out approximately 500 bhp in race trim.
David Durochik

To its credit, Ford didn't stop development. Right after Le Mans practice, a GT was taken to the Motor Industry Research Association wind tunnel in England. There it was discovered that significant amounts of lift were present even at 60 to 70 mph. So the pretty, plain body design got a new nose, complete with larger air inlets and substantial chin spoiler, and a kicked-up tail a la Ferrari was produced. Now the Ford GT could keep its feet on the ground.

Despite the efforts of dedicated technicians, fabricators, and mechanics, the Ford GT's potential remained unrealized through 1964. A single car was entered at the Nurburgring, but was retired from fifth place after the upper rear suspension attachment points proved too fragile.

At Le Mans, the final results were equally disappointing, but a Ford driven by Richie Ginther did lead the opening lap and another, with Phil Hill at the wheel, set fastest race lap of the year.