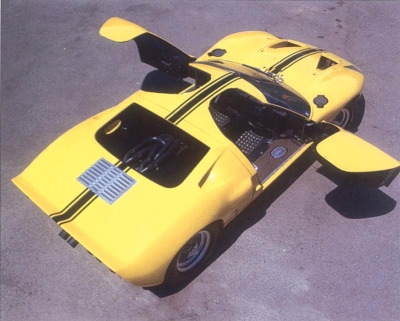 A faired-in spoiler at the trailing edge of the deck also helped keep Ford GT-40s planted on the pavement. Door cuts that extended deeply into the roof eased entry and exit for drivers.
David Durochik

Before Negstad, Lunn, former Aston Martin team manager John Wyer, and other figures in the making of the 1964-1967 Ford GT took up residence at Lola and moved the operation to new, more modern premises, Broadley went racing with the Mark 6. It showed potential -- any lightweight car with plenty of horsepower had at least some potential -- but was bedeviled by problems.

Some were minor (during one 1000-kilometer race the car was retired after either a distributor problem -- the official reason -- or because the wheel nuts wouldn't stay tight on their studs). Some were major (a crash at Le Mans was blamed on gearbox failure, although some accounts point to a serious aerodynamic problem as the culprit).

But time had run out for the Mark 6. Construction of Ford's design was well under way and, of the three Mark 6s built, two became test mules for Ford, while the third was sold to Texas oilman and race team owner John Mecom, who gave it a Chevrolet engine. (After a few disappointing outings, relieved by a win at the Nassau Speed Weeks, Mecom's car was destroyed in a crash at Riverside, California.)

In March 1964, the Ford GT was presented to the automotive press at the New York Auto Show. Low, sleek, and purposeful, it looked ready for battle. It wasn't.

The paint was barely dry on the car when it was loaded into a plane and flown from England to New York. Real testing had barely begun. Ford's plan was to have two cars at the Le Mans test days a little more than a month after the press debut, compete in the 1000-kilometer event in May, and be ready to take on Ferrari at Le Mans in June.

On paper, the Ford GT and the Mark 6 were very similar. Both were based on stressed-skin monococque chassis tubs-the Ford GT's formed of steel, the Lola's of aluminum -- to which conventional upper-and-lower A-arm front and lower-arm/upper transverse and trailing arm rear suspension assemblies were attached. Both, of course, used the small Ford V-8 powerplant, though the GT's was brought up to what the press releases called "Indianapolis" specification in terms of internal upgrades and carburetion.

Both had fiberglass body panels as well. Dimensionally, the two cars were close; the Ford GT had a 95-inch wheelbase, three inches longer than that of the Mark 6, was slightly wider, and considerably heavier, at a dry weight of 1820 pounds, versus the Mark 6's 1,465 pounds. (The Ford GT would get heavier still, as time went by.)

At introduction time, Ford was being quite open about the GT's gestation, giving full credit to its own people in Dearborn and in England. But somewhere along the way that changed, perhaps as a nervous reaction to the AMA ban on manufacturers' direct participation in motorsport then still in effect. (It sounds illogical, but somehow Ford-engined Lotuses at Indy and factory-backed Fords and Mercurys running in NASCAR didn't seem to mean quite the same thing in the executives' view.) Word came down from the top that nobody at Ford, save designated spokesmen, was to talk to the press about the Ford GT.