The 1964-1966 Imperial was part of a move by Chrysler in the first half of the 1960s where it dispensed with design and engineering heroics in favor of careful market planning, unified "committee control" at the top, more conservative styling, and vast -- sometimes rash -- expansion.

To his credit, president Lynn Townsend had smoothed the turbulent waters of the Tex Colbert/ Bill Newberg administrations, and began concentrating on the business of making money. If a trend away from Chrysler's innovation and independence during the 1950s could be seen in all this, no one was complaining. After all, Chrysler was giving the public what it wanted.

The 1964 Imperials were the first models designed by someone other than Virgil Exner since Imperial had become a separate make in 1955. The "someone" was Elwood Engel, who had come over from Ford to replace Exner in 1961, and who had begun to influence surface styling of Chrysler products as early as 1963.

Engel drastically revised the 1964 Imperial line. The old silhouette was now eliminated below the beltline, as well as above (the transformation had begun with a different roofline in 1963). The car was squared off, very much like the Lincoln Continental with which Engel had been closely associated. Like the Continental, its fenderline was traced in brightwork and there were lots of square corners. A divided grille was adopted, and Exner's freestanding headlamps summarily dropped. The rear deck was revised, not quite eliminating Exner's spare tire outline.

The Custom Imperial line was canceled, leaving the Crown as the base model and the LeBaron the most expensive. Also dropped as unnecessary was the "Southampton" designation for pillarless models -- all Imperials were hardtops, except the convertible. The Crown Imperial limousine built by Ghia in Italy was available with either six or four side windows, and continued on the special 149½ Winch wheelbase.

Imperial had an excellent year with over 23,000 1964 Imperials built, 65 percent better than 1963 and the second best year on record. Under Engel, a Lincolnesque design philosophy had emerged: the luxury car, Engel said, should not suffer the indignity of a comprehensive annual restyle. Like Mercedes (and Elwood's own Continentals) Imperial design now merely evolved; it did not change significantly from one year to the next.

Continue to the next page to see the gradual evolution of the Imperial in 1965 and 1966.

The 1965 Imperial gained a one-piece grille with covers over the headlights.
©2007 Publications International, Ltd.

The 1964, 1965, and 1966 Imperial evolved gradually. The only major change for the 1965 Imperial was a new grille with glass-enclosed quad headlamps. At the New York Automobile Show, Imperial displayed the exotic LeBaron D'Or show car, which used gold striping and embellishments, and was painted a special Royal Essence Laurel Gold. Prices rose a couple hundred dollars and the model lineup was unchanged.

Ghia of Turin stopped building Crown Imperial limousines in 1965, though 10 were constructed in Spain for 1966, using grilles and rear decks from that model. Starting in 1967, Imperial arranged to have the limousine built domestically. Production during 1964-1966 was only 10 units per year.

Again in 1966, an evolutionary approach produced a line of Crowns and LeBarons that closely resembled the design of 1964 and 1965. The changes did make 1966 one of the most beautiful Imperials, and probably the cleanest and most understated of them all.

The split grille of past models was replaced by an oblong unit that framed multiple rectangles. The rear deck was smoothed off, finally eliminating the ungainly looking bird emblem and tire cover outline. Wheelbase and overall length were unchanged. The previous 413-cid V-8 was replaced by Chrysler's new 440, which was rated at 350 bhp, 10 more than 1964-1965.

Comfort was the name of the game, and even rear-seat Imperial passengers sat in the lap of luxury.
©2007 Publications International, Ltd.

The 1966 Imperial was the last with a separate body and frame, and thus marked the end of the Imperial's different construction method compared to other Chrysler products. After 1966, Imperials would share the Chrysler unit body, and gradually they became more and more like a luxury version of the Chrysler.

To management's disappointment, Imperial had never really established itself as a separate make, and most people still referred to it as a "Chrysler Imperial." This image problem made it difficult to rival Lincoln, let alone Cadillac. Production tailed downward, with only about 18,000 1965 Imperials built and fewer than 14,000 of the lovely 1966 Imperials. Convertibles were extremely low volume cars, the figures being 922, 633, and 514 for 1964 through 1966, respectively. 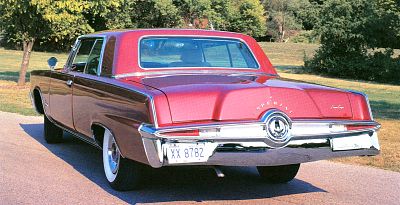 Despite a drastic restyling, the 1964, 1965, and 1966 Imperial never quite established itself as a unique entity like Ford's Lincoln.