The fourth generation 1964-1966 Ford Thunderbird models were not far removed from the third generation, retaining the same basic understructure and unit-body inner stampings while wheelbase increased fractionally to 113.2 inches.

But a complete reskinning vastly altered them on the surface. "There's a more powerful look which the stylists obtained by lengthening the hood and shortening the roof lines," said Car Life. "And there's a cleaner, stronger rear, achieved with two of the biggest tail/turn/stop lamps ever seen on an automobile."

The turn signals of the 1964 were intended to be sequential, but Ford ran into trouble with certain state regulations and was forced to wait a year while applying for the necessary permissions.

In detail, the 1964 retained a family resemblance to the 1963 but was obviously new. The pointed profile was still evident, but from front or rear it was completely altered. The quad headlamps were moved to the extreme edge of the fenders, where they cut into the face of the car in canted oval cutouts.

The rear end was the best design element, set off by two oblong taillights surrounded by protective bumpers. A lower pan, painted body color, contained the backup lights. The decklid retained the "twin-pontoon" theme of earlier models. Under it was a new "deep well" trunk, which gave much more luggage space, carrying the spare tire well forward.

The 1964 roofline retained the formal air of the past, but, taking advantage of a low-pressure area behind the backlight, now featured Silent-Flo, the first windows-closed, flow-through ventilation system on an American car. With a console lever, the driver could actuate a vacuum servo that opened a vent under the rear window.

This helped blast fresh air through the car. Flow-through ventilation had been introduced by Mercedes on its 1954 300SL gullwing coupe, and Mercury had used the meat-ax approach to create it with its retractable backlights in 1957, but the Thunderbird's was an elegant, functional design, and was soon widely imitated.

Designers had created more room in the 1964 Thunderbird, but it probably didn't matter. The typical Thunderbirder was a front-seat dweller. Nestled in a big vinyl bucket, restrained by a seatbelt extending from a retractable reel built into the seat edge, and surrounded by levers, buttons, dials and wheels, the driver was confronted with all the gimmicks at Dearborn's command.

It was an experience Car Life described as "begadgeted and bedazzling ... It should keep boys of all ages occupied." Ford ads repeated the slogan, "Flight plan cleared -- proceed to Thunderbird."

Continue reading to find out more about eventual design and performance changes to the Ford Thunderbird.

In the last year of its design, the 1964-1966 Ford Thunderbird gained a redesigned grille and taillights.
©2007 Publications International, Ltd.

The 1964, 1965, 1966 Ford Thunderbird models represented a series of design and performance changes. The drivetrain was unchanged from 1963, but the M-series (340 blip) engine was eliminated, along with the previous Sports Roadster model. Sales were terrific, exceeding 90,000 -- the best in Thunderbird history.

In styling, the 1965 naturally resembled the 1964. The grille was busier with its six new vertical bars bisecting the thin horizontal bars of 1964; the 1965 also had dummy side louvers and new "turbo style" wheel covers. The drivetrain was unchanged and the 300-bhp 390 engine remained the Thunderbird's sole powerplant.

A fourth model, the Limited Edition Special Landau, was added to the line in March 1965. Finished in Ember-Glo metallic, it had a parchment-colored vinyl top with matching carpets and upholstery. The owner's name was engraved on a numbered plate on the console, and the wheel discs were color-keyed.

Simulated woodgrain interior embellishments were done in a material somewhat richer than the standard Landau's. Yet the Special Landau cost only $50 more than the standard, which was a good deal if you happened to like Ember-Glo metallic.

Shoveling 'em out the door, Ford Division sold close to 75,000 1965 Thunderbirds -- not as good as 1964, but still the pace to beat in the personal-luxury car market. Despite growing competition from the Oldsmobile Toronado and Buick Riviera, sales at nearly 70,000 remained excellent for the 1966 model, which in some ways was the nicest of its generation.

The 1966 line included the usual hardtop, convertible, and "Town Landau," plus a new "Town Hardtop," using the plain metal roof style sans padded vinyl or dummy landau bars, and selling for $100 less than the Landau. Both Town models had a "Safety-Convenience" panel mounted in the central forward roof, including a seatbelt reminder light; all four models were available with a new stereo tape deck.

Good news for performance-minded buyers was a new optional 428 V-8 which offered a rousing 345 bhp for only $64 extra. The 428 shaved 1.5 seconds off the 0-60 time and gave the Thunderbird a genuine 120 mph capability.

The late John R. Bond summed up the pros and cons of these Thunderbirds quite adequately in 1965: "[It offers] more symbolism than stature. Only the blessedly ignorant view it as anything more than a luxury-class car for those who want to present a dashing sort of image, who worry about spreading girth and stiffening arteries, and who couldn't care less about taste."

Even when viewed in that light, however, the Thunderbird must be admired. It is extremely well done for its purpose. Its roofline, bucket seats and console have inspired dozens of lesser imitations, which, as the saying goes, is the sincerest form of flattery.

Continue reading to learn more about the 1964-1966 Ford Thunderbird specifications. 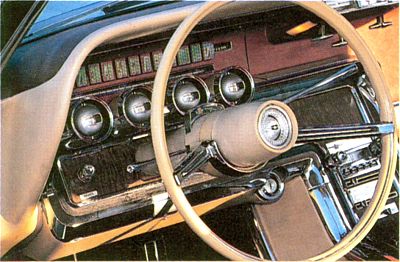 A popular accessory was the swing-away steering wheel, which swung about 10 inches to the right to ease entry and exit.
©2007 Publications International, Ltd.

The 1964, 1965, 1966 Ford Thunderbird specifications in some car enthusiasts' views were too heavily focused on design elements -- elements that, in their opinion, did not work.