The 1964-1965 Mercury Comet Cyclone transformed Mercury's Comet line. After plopping a small-block V-8 into the last of the first-generation Comets, Mercury was ready to turn toward some real muscle -- and hoping to wind up with a rock-solid reputation for machines that could move.

Four different series were found in the Comet lineup for 1964, but only one came with the enlarged 289-cid V-8 as standard fare. That was the Cyclone two-door hardtop, which paved the way for the transformation of the practical but anemic Comet-based line into one of the hottest performance names of the decade.

Breathing through a four-barrel carburetor, the 1964 Mercury Comet Cyclone's 289 whipped up 210 horsepower and 300 pounds/feet of torque. Both three- and four-speed gearboxes continued (the latter supplied by Warner Gear), but Multi-Drive Merc-O-Matic replaced the former two-speed automatic on the option list.

Little by little, performance was getting the nod from Mercury engineers. Other Comets, including the new Caliente series, came with six-cylinder power or the carryover 260-cid V-8; or could be ordered with the 289.

The short-lived Meteor was gone, a victim of sales that never got off the ground. Thus, Comets would have to serve as both compact and mid-size elements in the Mercury line. Styling changes included a switch to 14-inch tires and a wider stance, along with enough body modifications to produce a new personality. Quad headlights rested horizontally in a mesh grille, and remnants of tailfins remained out back, while bodysides displayed prominent, tapered creaselines, not unlike those of the restyled Falcon.

Car Life appreciated the removal of spears and flashes from the Comet body, and though the editors didn't care for the new fender cutout moldings, they nonetheless stated that the restyle "represents a pinnacle of restraint for [Lincoln-Mercury] stylists." Wheel covers were designed to look like bare wheels, with holes for chromed lug nuts.

Not exactly a hot seller off the line, the early Cyclone went for $2,655. Only 7,454 were produced in that first year. Car Life described the early Cyclone as a "spirited sprinting machine which should certainly appeal to that 'youth market' so avidly sought after by all the manufacturers."

See what was in store for the 1965 Mercury Comet Cyclone on the next page.

Modest cleanup of the bodysides gave the 1965 Mercury Comet Cyclone a neater look, helped by vertically stacked headlights and a wide, uncluttered rectangular grille of horizontal bars. Mercury called it an "enthusiast's dream car in every detail," which proved closer to the mark than most such claims.

Options included a black or white vinyl roof; a performance handling package with more responsive steering, modified shocks and higher-rate springs; and a "Rally-Pac" gauge cluster that put a vacuum gauge and elapsed-time clock atop the dashboard, along with the tachometer.

An engine dress-up kit was standard gear, brightening the rocker covers, air cleaner, dipstick, and radiator cap. Checkered flag insignias went on rear fenders. All told, Mercury Comet Cyclones were starting to look like performance cars -- just as they added the goodies to behave like one.

Motor Trend got a 9.7-second 0-60 time from its 210-bhp 1964 Mercury Comet Cyclone hardtop with four-speed. A quarter-mile dash took 16.2 seconds, reaching 80 mph. The 1965 Mercury Comet Cyclone, with an additional 15 horses waiting, the 0-60 figure dropped to 8.8 seconds. Other road testers weren't quite so quick, taking as long as 11.8 seconds to 60 with the 210-bhp edition. While these were hardly muscle-car figures, the Cyclone's time was soon to come.

Production rose sharply for the 1965 Mercury Comet Cyclone, reaching 12,347 units. Though a laudable performance -- and a harbinger of things to come -- it was still barely a blip in Mercury's total output.

Like the SC/Rambler, for one, early Cyclones ranked as "sleepers" in the muscle car arena, barely noticed behind the GTOs, Hemis, and Super Sports that were grabbing all the applause. Yet Comets and Cyclones were proving their mettle on many battlefields.

Four basically stock Cyclones powered by 271-bhp 289s went to Daytona and drove 100,000 miles, averaging over 105 mph. Meanwhile, a team of Comets ran the rigorous East African Safari. Fewer than 20,000 Cyclones had left the assembly lines in two years, but the name already was established and another generation was on its way.

See detailed specifications for the 1964 and 1965 Mercury Comet Cyclone on the next page. 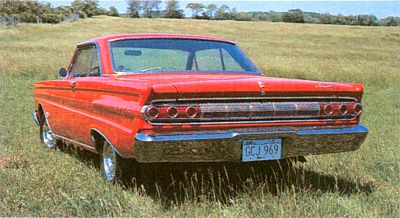