The 1964 Continental looked much like the 1963, though wheelbase was stretched by three inches. See more classic car pictures.
©2007 Publications International, Ltd.

Lincoln-Mercury kept their word with the 1964-1965 Lincoln Continental after promising that the timeless 1961 styling wouldn't change for the sake of change. Lincoln went from strength to strength in the 1960s, model-year production bounding from around 25,000 to a new all-time high of near 56,000.

The foundation for this success was the 1961 Lincoln Continental. Easily one of the decade's styling landmarks, it was instantly acclaimed so by no less than the prestigious Industrial Design Institute. So good was its basic design that only careful annual refinements would be needed to carry it well past decade's end.

The 1961s and the little-changed 1962-1963 Continentals had taken a fair chunk of business from Cadillac (even more from Imperial). Additional conquest sales were behind the significant changes made for 1964 -- enough to qualify the cars as second-generation versions of the original design.

With the 1964 Lincoln Continental, the thin-pillar four-door sedan and America's only convertible sedan returned, both with center-opening doors as before, plus a mildly revised grille with five vertical bars, a deeper and newly lipped trunklid, slightly sharpened sedan rear side windows -- and flat instead of curved door glass.

The last was suggested by Ford styling chief Gene Bordinat as a cost-cutting measure, but Bob Thomas, a member of the 1961 design team, was horrified. "The car was just not designed for flat glass," he said later. "It didn't look right."

Less obvious, perhaps, was a wheelbase stretched three inches, to 126, and overall length that now measured 216 inches. Thankfully, these gains had little effect on weight, and even this longer Continental was still shorter than a 1964 Cadillac or Imperial.

Even better, the extra rear overhang added some trunk space and made room for a lower-profile convertible top, while the flat side glass, debated though it was, added 5.4 inches to overall shoulder room.

The longer wheelbase showed up in extra rear leg room, which was much needed, and also brought three-inch-longer rear doors that improved entry/exit. A front seat moved two inches forward added more space in back. To compensate for the resulting loss of room up front, the previous "twin-cowl" dash gave way to a trimmer full-width design, matched by a shorter steering column. 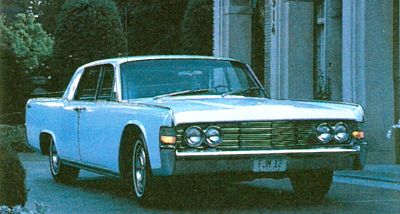 The rear end of the 1965 Continental lost the simulated grille panel between the taillights.
©2007 Publications International, Ltd.

The 1964-1965 Lincoln Continental continued to attract faithful buyers, especially those put off by Cadillac's constant revisions.