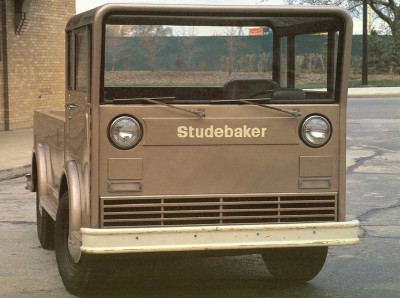 Studebaker's time had almost run out when a small hope for survival arrived in the form of the 1963 Studebaker Westinghouse pickup truck concept.

Studebaker abandoned more than two sporting automobiles when it fled to Canada in late 1963. It also gave up on trucks. That was sad, for Studebaker had often done well with commercial vehicles, which it began offering a few years after getting into horseless carriages with electric cars in 1902.

Though trucks were always a sideline to South Bend's car business, it might have been the other way around. As marque expert Fred K. Fox observed in Studebaker: The Complete Story, the company's "biggest mistake, as far as truck sales are concerned, was made in the 1910s, when they did not push boldly into the truck market before they quit the horsedrawn wagon business. Had they done this, they might have come out of the Depression as a major truck producer that built cars as a sideline."

As it was, Fox wrote, "the health of the truck division always depended on the health of Studebaker's car division."

And in 1963, Studebaker's car division was anything but healthy. The firm gushed some $17 million in red ink that year, its fourth biggest annual loss in the postwar period after disastrous 1954-1956.

The truck line reflected decades of corporate ups-and-downs by having seen little basic change since 1949, mainly because sales were seldom high enough to justify the costs.

Though Studebaker did manage the cute little Champ pickup in 1960, with cab styling borrowed from its year-old Lark compact car, this was just more old stuff in a new wrapper that couldn't hope to generate the needed sales or income. Overall, the company wrote its 1960 ledger in black, but the bottom line was a slim $709,000.

In 1961-1962, however, Studebaker rebounded to earn over $5 million, thanks to the energetic efforts of its new president, the hard-driving Sherwood Egbert.

Egbert came aboard in 1961 and immediately put the rush on facelifts for Studebaker's existing cars. The eminent designer Brooks Stevens came through beautifully for 1962 with a remodeled Lark and a more fully overhauled "family sports car," the retitled Gran Turismo Hawk.

Egbert also got fast results from the Raymond Loewy group on the sleek new high-performance, image-boosting car he wanted, and within months the world was applauding the singular Avanti.

These projects depleted funds that might have been used to rejuvenate the Studebaker trucks, but Egbert did what he could, adding a flush-fender "Spaceside" Champ and new diesel-powered light- and heavy-duty models in 1961-1962.

He also went after more military and government business, and even arranged to repurchase a Studebaker truck factory that had been sold to the Curtiss-Wright combine, which still nominally controlled South Bend's affairs.

Trouble was, that plant cost a hefty $7.5 million, yet the order for the half-tracks it was supposed to build was cut in half, and remaining production didn't begin to cover the purchase price. Egbert continued trying to push Studebaker as a "big truck" producer, but with little success.

The company was staring down a very dark tunnel by mid-1963, when a faint glimmer of light appeared. It came in the form of a $9 million contract to build some 4,200 small postal delivery vehicles.

Unfortunately, Studebaker's role in the "Zip-Van" project involved mere assembly of a collection of its aging truck components within a tall, square body supplied by Met-Pro of Lansdale, Pennsylvania.

Of course, this order was welcome -- any new business was by then -- but it was too modest to offset losses from withering sales of Studebaker's mainstay cars. By November, the clock on the South Bend wall read one minute to midnight.

One last proposal saved the day for Studebaker. Continue on to the next page to learn more about the 1963 Studebaker Westinghouse Pickup Truck Concept Car Project. 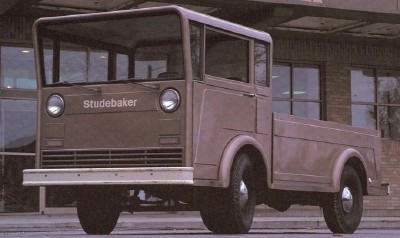 Approaching Egbert directly, the president of the big electrical and home appliances maker asked whether Studebaker would be interested in designing and building a fleet of compact, purpose-designed delivery vehicles. Egbert couldn't say yes fast enough. The result was the one-of-a-kind prototype you see here -- Studebaker's last truck.

According to an article in the February 1983 Turning Wheels, the official publication of the Studebaker Drivers Club, there were actually two Westinghouse prototypes: the pickup pictured here and a companion van.

The pickup was unearthed in late 1982 by SDC member Terry Chase of Nashville, Michigan, who stumbled across it in one of those proverbial old barns (about 70 miles from his home) that enthusiasts just know contain rare treasures like this. The van, unfortunately, has yet to resurface.

But fairly complete records of this project also survived, and they were interesting. Predictably, styling was handled by Studebaker's beleaguered design chief Randall Faurot -- the last person to hold that title in South Bend.

Seeking high simplicity, doubtless with an eye to minimizing costs for both Studebaker and Westinghouse, Faurot sketched a cab-over-engine (COE) design with nary a curved line on it save headlamps and wheel arches. The result was boxy in the extreme, but the simple flat panels were a stamping operator's dream.

Dominating the high bluff front was a big windshield canted forward at the top, suggesting that no thought was given to aerodynamics. Then again, this was long before "airflow management" was deemed important for any vehicle.

And besides, these were supposed to be short-haul utility rigs, not high-speed interstate flyers. Interestingly, though, Faurot also sketched an upsized version of the Westinghouse design as a diesel semi-tractor trailer.

Faurot had sketched the pickup with a right-side box panel that dropped down to form a load ramp, as on Chevrolet's rear-engine Corvair-based Rampside, which pioneered this feature on its 1961 debut.

However, the completed Westinghouse pickup prototype had a conventional box, plus a less prominent grille; Faurot had envisioned a low, full-width eggcrate with the headlamps at its outer ends. The van was penned with conventional dual center-opening load doors behind the right-side cab door, but was otherwise similar to the pickup.

As usual, the capable Gene Hardig, a veteran of many spare-every-expense South Bend products, handled engineering chores for the Westinghouse project. He made liberal use of the parts bin -- again -- mainly because he had no other choice.

Inevitably, Studebaker's familiar 289 V-8 was plunked directly beneath the cab to drive the rear wheels -- somewhat extravagantly -- through a three-speed automatic transmission with "Power Shift" manual-hold control, just like in the pricey Avanti.

The prototype used Avanti parking lights and 1961-1966 standard-Studey door handles. Its dash was similar to the Champ panel: a simple affair with a small gauge cluster dead-ahead of a big steering wheel, which sat almost horizontally atop a long column poking up from the floor.

Bus drivers would have felt at home behind the upright wheel of
©2007 Publications International, Ltd.

Despite its "big-rig" looks, the Westinghouse pickup was quite compact. It featured a trim 95-inch wheelbase and 168-inch overall length, while width measured 72 inches, overall height was a towering 78. The pickup box was eight feet long, a standard size suggesting that it, too, came off the shelf.

1966 -- The End of the Road for Studebaker Vehicles 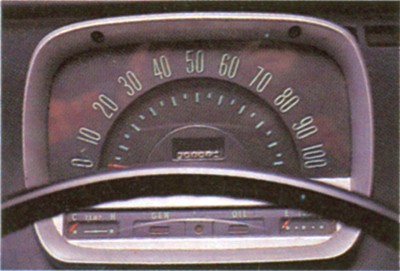 Studebaker decided to close its South Bend plant in December 1963, and a few years later, in 1966, came the end of the road for Studebaker vehicles.

The Westinghouse project apparently prompted Studebaker to think about a whole line of "forward control" trucks as a mid-1960s replacement for its elderly Transtar models.

Faurot's diesel-tractor proposal suggested this, as did another artifact from Studebaker's last days in South Bend: a 3/8-scale model for an altogether more comely COE pickup.

This envisioned simple construction like the Westinghouse design, but wore a curved front swept gracefully upward in an unbroken arc from bumper to roof. It looked nice; what a shame that nothing further was done with it.

But curved or boxy, car or truck, no future Studebaker had a prayer of production once the board of directors decided to flee South Bend in the face of cash reserves fallen desperately low.

Studebaker thus closed its crumbling high-overhead Indiana complex in December 1963 and forgot all about trucks, not to mention the Avanti and GT Hawk.

Egbert was duly fired, and a new management team bet what meager funds were left on heavily restyled Larks built at the firm's Canadian operation in Hamilton, Ontario. But it was all in vain, and after 114 years, Studebaker gave up on wheeled vehicles altogether in mid-1966.

Today, the prototype Westinghouse pickup sits cheek-to-jowl with other historic Studeys at the Studebaker National Museum in South Bend. It's a place well worth visiting, if only to be reminded that innovation so often flourishes in adversity -- and that no enterprise is immortal.