With crisp new "Jet Smooth" styling and the most powerful V-8s in Chevy history, the big 1963 Chevrolet Impala SS was hard to beat. Still is, in fact -- especially the hot-looking droptop convertible.

Classic Cars Image Gallery
Detroit's Big Three swore off racing in 1957, largely under pressure from the "safety lobby," yet within a few years they were back at it, sneaking special parts and low-key technical support to all manner of drivers and mechanics -- unofficially, of course. Chevrolet was more active than most makes, and in 1961 it came out of the closet with a new SS package that added bucket seats, shift console, and other racy touches to the lush Impala convertible and hardtop coupe. At the same time, Chevy introduced its biggest V-8 yet, a 409 with 360 horsepower. The result was a legendary performer that cast a glow over the entire Chevy line.
The SS proved popular and immediately became an Impala sub-series. Enhancing its appeal for 1963 was Chevrolet's new "Jet Smooth" big-car styling, a crisp, broad-shouldered look that helped SS sales soar beyond 153,000. The SS convertible started at $3186 with an available 250-horsepower 327 V-8. Optional small-blocks offered up to 340 horses, and the "real fine" 409 big-block packed 340 to 425 depending on your courage and budget. Manual four-on-the-floor was available too, but a '63 SS in any form was a great way to go. Still is.

For more classic convertibles of the 1960s and 1970s, see:
For more information on all kinds of cars, try these: 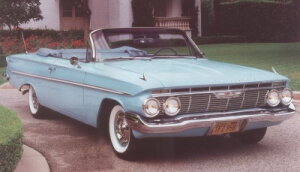 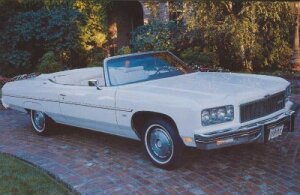