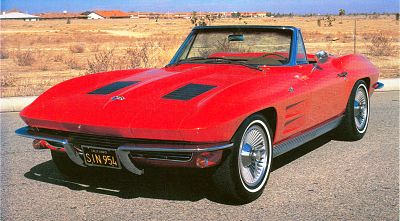 As popular as America's sports car had grown since its 1953 debut, it was time for a change for the 1963-1967 Chevrolet Corvette Sting Ray. Even the most superlative design grows whiskers after a decade, and Chevrolet chief Bill Mitchell and stylist Larry Shinoda faced a tough task: to improve a living legend.

Not only did they succeed, but their creation turned into a modern classic -- the most collectible Corvette of them all -- and sent sales soaring to record levels.

Seeds were planted by the Stingray Special racer and experimental XP-720, which displayed a smooth fastback profile and split back window. These and other styling details -- pivoting hidden headlights, doors cut into the roof, a beltline dip -- wound up in the production Sting Ray.

Quad headlights aligned with the pointy front end when shut, rotating open when needed. Luggage space grew, though lack of a trunklid earned few plaudits. Less fiberglass but nearly twice as much steel went into the sculptured-tail body, which rode a shorter (98-inch) wheelbase.

For several years, a removable hardtop had been optional. This generation went further, producing both the expected roadster and a full-fledged (doubly dramatic) hardtop coupe.

What drew the eye most in the coupe's shape was that split window, an idea from Mitchell that was not universally adored. It served as part of a full-length dorsal "spine" that began on the hood, continuing as a creaseline across the roof and down to the tip of the "boattail" canopy.

One of the naysayers was renowned Corvette engineer Zora Arkus-Duntov, who praised the performance but faulted the coupe's rearward visibility.

Public reaction was far more favorable, but critics prevailed, so a single pane was used the next year. Thus, the split-window Sting Ray later became the most coveted Corvette in history, both for its distinctive silhouette and its comparative rarity.

Go to the next page to find out about the styling and sales success of the 1963-1967 Chevrolet Corvette Sting Ray.

Underneath, a ladder-type frame replaced the old X-braced chassis. Far more noticeable was the new independent rear suspension: a three-link setup with double-jointed drive shafts on each side, and a single transverse leaf spring.

Power steering became available for the first time, except on the most potent engines. Only 12 percent of Corvettes had it. Even fewer customers opted for air conditioning or leather seats. Corvette fans, it seemed, still scoffed at frills. Four-speed gearboxes were far more popular, installed in more than four out of five cars.

The Sting Ray's debut was nearly as startling as that of the E-Type Jaguar a couple of years earlier, and the public yelled "yes" to the design. Production leaped by 50 percent over record-setting 1962, totaling 10,919 convertibles and 10,594 coupes, priced at $4,037 and $4,252, respectively.

Except for the loss of the backbone window and fake hood air intakes, 1964 brought minimal change. Simulated vents on the coupe's pillar became functional and instrument bezels turned black.

Variable-rate springs helped smooth the ride and flatten the cornering. The solid-lifter V-8 got a higher-lift cam for 365 horsepower, while the fuelie added 15 bhp.

To keep all that energy under control, four-wheel disc brakes became available. Anyone craving more attention could order side-mounted exhaust pipes. A 427-cid enlargement followed the next year, adding no horsepower but developing more torque, as an eggcrate-patterned grille replaced the horizontal-bar form.

Final Sting Rays had the cleanest look of all, with every surface smoothed out. Top 427s whipped up 400 or 435 horsepower, using triple two-barrel carburetors and the option of $369 aluminum heads. Regular folks could only fantasize about the ultimate competition mill, with 12.5:1 compression and 560 horses champing at the bit-plus a thirst for 103-octane fuel.

An "ordinary" 427-cid Sting Ray, able to run the quarter-mile in 13.6 seconds at 105 mph, surely was enough to satisfy any reasonable person. At least until the next Corvette generation arrived.

For 1963-1967 Chevrolet Corvette Sting Ray specifications, go to the next page. 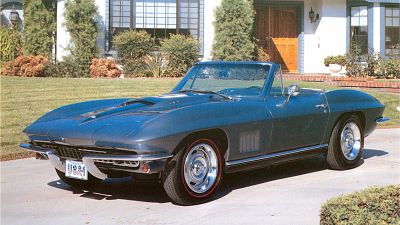 Production numbers for the 1963, 1964, 1965, 1966, 1967 Chevrolet Corvette Sting Ray remained high, even though the styling was virtually unchanged throughout those years.