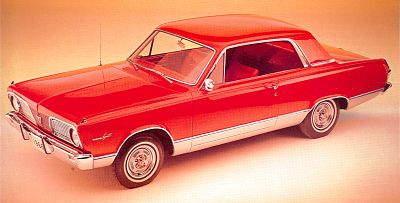 Though the 1963 Valiant Signet was built on the same 106-inch wheelbase as the 1962 model, it carried new, boxier styling. Little changed cosmetically for 1964.
©2007 Publications International, Ltd.

Plymouth probably wishes it had a car like the 1963-1966 Plymouth Valiant Signet today. Introduced as one of the Big Three's new 1960 compacts, Valiant did good business throughout its long life, which ended in 1976. Without it, Plymouth would have fared far worse than it did in some years, particularly 1962.

That, of course, was the year Plymouth suffered a mighty sales slide with standard cars that looked like Valiants and weren't much larger. But it was also when Plymouth fielded a bucket-seat Valiant hardtop coupe called Signet.

Neither Chevy's Corvair Monza, which had uncovered the sporty-compact market, nor Ford's Falcon had anything quite like it, yet model-year sales weren't sensational at some 25,600.

Still, sporty compacts were catching on fast, and the 1963 Plymouth Valiant Signet kept pace. It even set the pace in some ways. Where Corvair and Falcon again wore facelifts, Valiant styling was all-new -- cleaner, though somewhat less distinctive than the year before.

Lead times being what they were in those days, it was the work of Virgil Exner and not his replacement, Elwood Engel, who didn't exert serious influence on Chrysler Corporation styling until 1965. Perhaps Exner was hurt by criticism -- or slow sales -- of his recent efforts, for the 1963 Valiant was surprisingly conventional in both form and detail.

Though overall length was up two inches on an unchanged wheelbase, the 1963 Plymouth Valiants looked smaller than previous ones, thanks to more equal hood/deck proportions and rounded instead of sharp contours. Simplicity was a hallmark, from a new dual-headlamp front to a tidy tail with just a hint of fins.

Signet tacked on a "200" suffix, and the familiar hardtop coupe was joined by a nifty new convertible, matching a 1962 Corvair offering. The ragtop repeated with a bench seat in the mid-range V200 line, which along with the base V100 series offered two- and four-door sedans and a four-door wagon. Valiant would keep this basic lineup through 1966.

Signets remained the brightest and sportiest Valiants, with additional chrome accents inside and out, plus special wheel covers and all-vinyl bucket-seat interiors. A power top was optional for the convertible in lieu of the standard manual affair.

In all, not very exciting perhaps, but Valiant's main mission was reliable economy transportation, which it delivered. The 1963s were priced a few dollars below comparable 1962s and shared in Chrysler's new corporate-wide 5-year/50,000-mile powertrain warranty, an industry first designed to win back buyers put off by the so-so workmanship of recent Highland Park products.

This, together with the new styling, boosted Valiant volume by more than two-thirds to over 225,000. Signets accounted for about 18 percent -- good but not great even considering some new 1963 competition, not the least being Dodge's stylish Dart GT.

See how the Plymouth Valiant story continues with the 1964 model year and beyond in our next section.

The V-8 gained a high-performance version for 1965, yet sales dropped by two-thirds, and the 1966 version would prove to be the last of this generation.
©2007 Publications International, Ltd.

There were two big newsmakers for the 1964 Plymouth Valiant Signet. One was Valiant's first V-8 option, the fine 180-horsepower 273 derived from Chrysler's new-generation 318 and also offered for Dart.

But from midseason, the 273 was also available in a fastback Valiant derivative, the Barracuda. Though Signet hardtop sales weren't immediately affected, Barracuda did about two-thirds as well despite its short selling season, a sign of things to come.

Another mild facelift occurred for 1965, when the previous year's full-width horizontal-bar grille gave way to a busier three-section treatment. The V-8 was heated up to 235 horsepower as a new option, but Valiants offered nothing like the Formula S performance-and-handling package available for Barracuda, which was now separated from the Valiant line and outsold the Signet hardtop by better than 5-to-l.

A squarish new front with split grille arrived for 1966, the last year for the basic 1963 Valiant design, and a more formal-looking hardtop roofline could be newly capped with a vinyl top. Signet sales went up a bit, but overall Valiant production was the lowest since 1961: 138,000, versus over a quarter-million just two years before.

Then came conservatively styled all-new 1967s that returned Valiant entirely to its original economy-compact role. Wagons went away, hardtops and convertibles became Barracudas, and Signet was merely a better-trimmed pair of sedans above V100s. The name disappeared after 1969, thus ending Valiant's brief fling with sport.

Find specifications for the 1963-1966 Plymouth Valiant Signet in our final section.