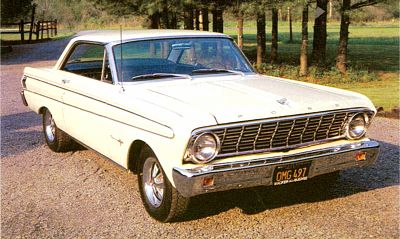 The 1963-1965 Ford Falcon Futura Sprint models represented an evolution in Ford's design approach over a brief period of years, and few would have thought of the first Falcons, debuting for the 1960 model year, as cars that excite.

Their mission was practical transportation, and some even proclaimed them as modern successors to the everlasting Model A Ford. Others took a dimmer view, branding Falcons as prime examples of the short-lived, disposable automobile.

Appearance of the Futura two-door by 1962, with bucket seats no less, sparked just a twinge of interest among the sporty set. But only a twinge. After all, Falcons were powered by a minimalist 144-cid six: easy to service, reliable enough, but anemic when hitting the pedal, especially when equipped with two-speed Fordomatic.

Upgrading to the bigger 170-cid six with its 101 horsepower didn't deliver a vast improvement. Falcons rode pleasantly and were surprisingly roomy inside -- but rarely delivered thrills.

Then came 1963, and two big changes: arrival of a pretty little Falcon Futura convertible, accompanied by installation of a V-8 engine in the Sprint series added at midyear. A Sprint hardtop coupe also became available, which wore the rounded Falcon body quite well, with its restyled horizontal-bar grille.

First of the V-8s was a "Challenger" small-block of 260-cid displacement, cranking out 164 horsepower. Not until late in 1964 did a bigger 289 arrive, jacking output up to 200 bhp. Stuffing in a V-8 gave Falcons a much-needed performance boost, but without losing much of the fuel economy for which they'd become famous.

Sprints had special trim, including a simulated hood scoop, bucket seats alongside a console and full instrumentation -- including a 6,000-rpm tachometer mounted atop the dashboard.Leather-like vinyl trim came in five color choices, while simulated wire wheel covers and a sports-type steering wheel rounded out the package. A floor-shifted four-speed proved more pleasing than Falcon's customary column-shift three-speed.

Car and Driver ran an early V-8 Sprint through its paces, ambling off to 60 in a comparatively leisurely 12.1 seconds. A quarter-mile dash (figuratively speaking) took 18 seconds, with the Sprint edging up to 73 mph. Motor Trend was quicker, making the 60-mph trip in 10.9 seconds.

In muscle-car terms, there was nothing to get excited about here; but for a Falcon, this was mighty quick travelin'.

Continue reading to learn more about the eventual success of the 1963-1965 Ford Falcon Futura Sprint. 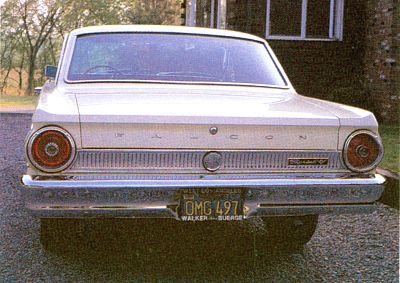