With the 1963-1964 AMC/Rambler Ambassador and Classic, American Motors reached the pinnacle of prosperity. In the early 1960s, they had invented something new and different in the stubby, slow, but well built and economical Rambler.

However, the handwriting was on the wall for AMC as early as 1960, when the larger manufacturers all fielded their own compacts. As the decade wore on, AMC corralled less and less of total industry sales.

In 1963, for example, they built as many cars as they had in 1960, but overall total car sales had increased so much that it gave AMC only sixth place in production; the same output in 1960 had put them third.

In early 1962, George Romney resigned as president and chairman of AMC to run for governor of Michigan. New president Roy Abernethy, whose background included Kaiser and Packard and who had built the great AMC sales effort under Romney, reacted to the mounting sales problem in a logical way: "Let's get rid of this Romney image."

But in across-the-board face-offs with the Big Three, AMC was at a disadvantage. It lacked the resources of GM, Ford, and Chrysler, and it hadn't the sales volume to spread out new model expenses and advertising over a million or so cars.

An ace in the hole was chief stylist Richard A. Teague, who proved adept at reskinning the dowdy products of his predecessors and inventing new and interesting models like the Marlin, Javelin, and AMX.

The top-of-the-line underwent repeated changes in this period, as management tried to slot it into an area where it would sell better and be a more intrinsic part of the AMC family.

In 1962, with a decent share of the compact market still intact, it emerged as a deluxe Rambler, sharing the latter's wheelbase and bodyshell.

Go on to the next page to learn about the successful restyling and sales of the 1963-1964 AMC/Rambler Ambassador and Classic.

The restyled 1963 AMC/Rambler was smooth and streamlined, as seen in this four-door wagon.
©2007 Publications International, Ltd.

For 1963 Teague completely restyled the AMC Rambler, and the AMC Ambassador with it. The earlier body had been around essentially since 1956, and badly needed replacement.

Teague's successor was a smooth, streamlined affair on a slightly larger (112-inch) wheelbase, with curved side glass and a clean grille. Gone were the curious angles, semi-tailfins, and tortured sheetmetal of the past.

It was an altogether competent styling job, and the following year Teague applied the same design to the smaller Rambler American.

A Mercedes-like three-number model designation was developed, with the Americans occupying 200-400 series, the Rambler Classic 500-700, and the Rambler Ambassador 800-900. To the usual four-door sedan and wagon bodies, a new two-door sedan was added and, in 1964, a two-door hardtop.

Unfortunately, the ground-up restyle was a tremendous investment for a smallish company, and AMC had to make do with the timeworn 195-cid six and 327 V-8, which had been around since the Nash and Hudson days. In 1964, a decrease in bore produced a 287 cid version of the V-8, optional on the Rambler Classic.

Baseline Classic 550s were essentially fleet cars, detrimmed and cut to a competitive $2,100 base for the sedan models. They accounted for an encouraging 75,000 sales.

The bread and butter Rambler was the 660 (135,000 sales), a more posh version with carpets, armrests, Captive Air tires on wagons, and a few minor goodies. The Rambler 770 added as standard a clock, padded dash and visors, full wheel covers, and foam seats.

The feature that chiefly distinguished it from, the Rambler, however, was its standard V-8, still at 250 horsepower, with 270 optional. With the Ambassador sharing virtually every other feature with the cheaper Rambler, the V-8 was the only reason to pay the extra money for one (about $300-$400 car for car), since you could not get a V-8 Rambler.

The evidence is that AMC had finally hit upon the right Ambassador formula: sales of 1963s exceeded 37,000, a record for the model. Also, people definitely wanted luxury: Ambassador 990s outsold 880s nearly 2-to-1, and the baseline 800 hardly registered on the graphs. (Only 43 two-doors were built.)

In 1964, AMC's emphasis was on the redesigned American -- as pretty a car as Dick Teague ever crafted. Rambler/Ambassador changes were confined to a facelift, plus one new model, a two-door hardtop.

Offered only as an upper-level Rambler 770 or Ambassador, the hardtop offered an enormous glass area, and sales were brisk. Especially attractive was the Rambler Typhoon, a limited edition (2,520 units) painted Solar Yellow with black roof and front bucket seats.

Striving again to fine-tune his marketing attack, Roy Abernethy now decreed a move that George Romney would never let him do: put V-8s into Ramblers. To give them some sales room, he pared the Ambassador line to four models, all 990s.

The Rambler's 287 was a sprightly engine, probably capable of a lot more power than it produced; but it wasn't the key to riches. People still definitely visualized Ramblers as economy cars, and sixes outsold V-8s by a wide margin.

During calendar year 1964, AMC built fewer than 400,000 cars for the first time since 1961, falling to eighth in the industry. In the next few years it would drop still further behind, ending the decade with annual outputs of about a quarter-million units.

The company's problem was twofold: Its traditional best-seller, the Rambler, was no longer in vogue, because prosperity was back and with it a public thirst for horsepower and performance; and because the new models AMC was introducing were not regarded as unique enough to change the buying habits of traditional Big Three customers.

It still had many interesting developments ahead, but American Motors as giant-killer had come and gone.

For the 1963-1964 AMC/Rambler Ambassador & Classic specifications, go on to the next page. 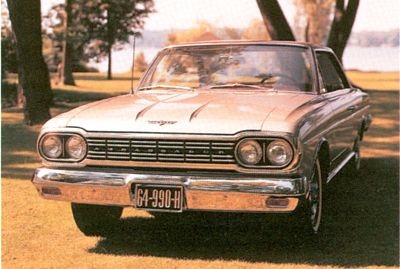 The 1963-1964 AMC/Rambler Ambassador and Classic may have started out stubby and slow, but chief stylist Richard Teague turned these economical cars into smooth, streamlined beauties with tons of options and V-8 pep.