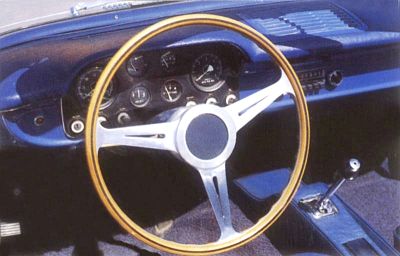 In addition to the buckets and console, the XR-400 (later XR-Budd) came with complete instrumentation and a sports steering wheel.
©2007 Publications International, Ltd.

At least two factors explain why AMC Passed on the 1962 Budd XR-400. First, the company was in the midst of a historic management change. Its president, George Romney, high priest of compacts, went off in February 1962 to make his successful run to become Governor of Michigan. Taking his place was the enthusiastic Roy Abernethy, who had his own ideas about cars, sporty and otherwise.

Judging by his practical-minded dictates for the unfortunate "3 + 3" Marlin of 1965, it's likely that Abernethy deemed XR-400 too small to be competitive against other sporty compacts, and thus not likely to be a profit-maker.

More critically, AMC probably decided it couldn't afford the XR-400 no matter how cheap the tooling. Remember that in 1960, despite the advent of Big Three compacts, AMC was still king of the small-car hill, earning a record $60 million on some $870 million in sales and model-year production of near 459,000 units.

But that new competition helped depress profits to $23.5 million in recessionary 1961, and 1962 earnings were little better at $34.2 million even though sales reached $1 billion. With the new mid-size Classic/Ambassador a major expense, 1963 profits came to $37.8 million despite higher sales of $1.1 billion.

Finally, AMC already knew the market was fast-swinging to sporty cars; indeed, it joined the bucket-seat brigade in 1962.

What's more, designer Dick Teague had sculpted pretty new Rambler American compacts for 1964; among them was a true four-passenger convertible that Abernethy doubtless felt would sell far better than a 2 + 2 in the burgeoning sporty-car wars.

In the end, AMC was probably right to ignore the opportunity's knock of XR-400. Even if buyers had accepted the rather sedate Budd styling, the limited interior package would have been a tough sell.

Besides, a sports car, no matter how "practical," was the last thing people expected from AMC in those days -- and that AMC dealers knew how to push.

But tantalizing questions remain. Would a Rambler sports convertible have been as hugely popular as the Mustang? Would it have brought the same high prosperity? Could that have changed AMC's destiny?

Would AMC be with us now had it introduced the XR-400 in late 1963 (which Budd said was entirely possible) -- a good six months before Mustang? Sadly, we'll never know the answers.

What we do know is that the XR-400 made two public outings soon after AMC's rejection. Renamed "XR-Budd," it helped tout the firm's then-new disc brake in an exhibit at the Detroit Auto Show and Society of Automotive Engineers annual convention, both in early 1964.

Later, according to Paul Flancbaum of Budd's Public Affairs Department, the car appeared in several parades and was occasionally driven by senior company officials.