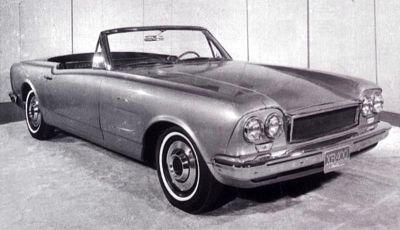 The completed XR-400 was presented to AMC management for review. Up front were quad headlights and a severely rectangular grille filled with a fine mesh.
©2007 Publications International, Ltd.

Budd Company's pitch to AMC management estimated that "total new tool, jig, and fixture costs for production of the complete body-in-white and underbody would not exceed $4,100,000." That, said Budd, was about half the cost of a similar car tooled from scratch.

Unit cost was pegged at $450, close to the XT-Bird estimate. So was promised delivery: again about six months, which Budd was proud to note was the time taken to design, engineer, and build the prototype.

Budd allowed that "Mr. and Mrs. America" were put off by import sports cars because of high cost, lack of passenger space, weak resale values, and scarcer parts and service; the firm also recognized a public "preference for American-made products."

The XR-400 side view presented a fake front fender vent, sculpture line above the rocker panels, and a beltline dip in the doors.
©2007 Publications International, Ltd.

But these facts only further argued for XR-400: "After all, it would be made in this country servicing and parts would present no problems [with AMC's broader dealer network]  the price would be right and [XR-400] would be a truly useful second car, for it would provide passenger space available in no other comparable car."

That last statement was true on its face, but even Budd's own photos showed the rear seat was really too small for anyone bigger than grade-schoolers.

No matter. Budd lobbied as hard for the XR-400 as it had for XT-Bird.

Consider this bit of schmoozing: "What could be more appropriate than for American Motors to introduce a brand-new idea in sports cars -- classic in styling, in road-ability, in performance -- but designed and built for family motoring pleasure. It seems to us to be the kind of idea that could create a revolution -- admittedly a smaller-scale one -- of the character set off some years ago when you introduced another brand-new idea the compact car."

Americans purchased millions of compact cars in the earliest part of the 1960s but began demanding sportier cars. The timing of the XR-400 would have put AMC into the thick of the bucket-seat wars.
©2007 Publications International, Ltd.

More ego-polishing included notions of pioneering a market "presently untapped by any other manufacturer" with a car so "unlike anything else on the road it would attract widespread attention provide your dealers with both a new profit area and morale-builder and offer unusual advertising and sales promotion opportunities."

These arguments were a lot like the reasons Iacocca would use to muster the Mustang. And why not? The evidence was there for everyone to see. Yet for all the kind words and rosy picture-painting, AMC was unmoved. So like the XT-Bird, XR-400 was a no-sale.

Find out why AMC pass on the XR-400 in our final section. 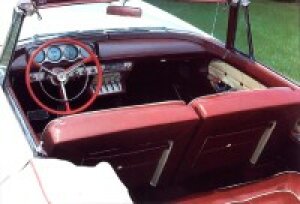