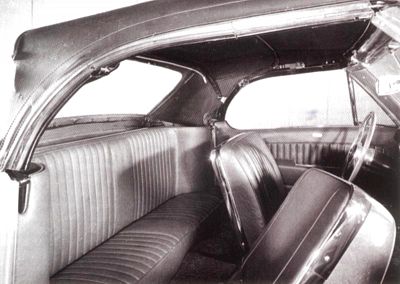 Let's consider Budd Company's pitch to Ford. Fast-forward to late 1961, when a young new president of Ford Division named Lido Anthony Iacocca began searching for sportier stuff to add to his wares. As it happened, division engineer Thomas B. Case, who had worked on the original T-Bird, was now planning manager for Ford's just-launched Falcon compact.

Well aware that Ford had been besieged by dealers and customers for a new two-seater since the last 1957 Thunderbird, Iacocca instructed Case to investigate the feasibility of a Falcon-based sporty car using the old two-seat T-Bird body.

Case called Budd, which happily advised that all 1957 T-Bird body tooling was still intact -- and available. Seeing the chance for a lucrative new Ford contract, Budd promptly ran up a prototype of Iacocca's concept. They called it "XT-Bird."

Starting with a 1961 Falcon, Budd engineers trimmed the understructure to fit the 1957 T-Bird bodyshell, which included slicing wheelbase from 109.5 inches to the original 102. Styling was updated by snipping off the old tailfins and lowering front fenders, though Budd ingeniously managed to retain the vintage dashboard and cowl.

In deference to contemporary tastes, the wrapped windshield and its severe "dogleg" gave way to straight A-pillars with front quarter-vents. Like the 1957, the XT-Bird had a steel body with an integral soft top that folded into a well behind the cockpit. Unlike the original, that cockpit contained a small rear seat that could hold a couple of kids or be flopped down for extra luggage space.

Budd executives pushed hard for the XT-Bird, arguing that unusually high resale values of 1955-1957 Thunderbirds suggested a strong, unmet demand for this updated version. They also noted that using the old dies together with high-volume Falcon mechanicals would keep the list price attractively low -- around $2,800 by Budd's estimate.

Additionally, "The total tool, jig, and fixture costs would not exceed $1.5 million. We could ship the entire body-in-white for a total unit cost of between $350 and $400 six months from the day you authorize us to start." Such fast, low-cost development was an accountant's dream.

In the end, though, the XT-Bird was refused, mainly for a lack of full four-place seating, though dumpy lines didn't help. Still, it did spur work toward Iacocca's eventual Mustang, the first "ponycar." The rest, as they say, is history.

Budd Company didn't give up, however. Learn how the XT-Bird became the XR-400 on the next page.