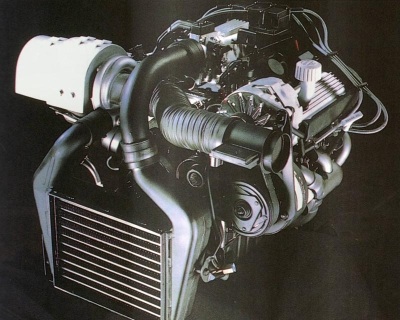 Economy may have been the inspiration for the Buick V-6 and its return to GM, but in 1976 a different spark ignited interest in this engine -- performance. A Buick Century T-Top coupe with a turbocharged 231-cid V-6 was chosen as the Official Pace Car for the Indianapolis 500, forecasting a production turbo engine that did in fact debut two years later. Two other V-6 Official Pace cars were to follow: a 1981 Regal coupe with a naturally aspirated 4.1-liter V-6 and the 1983 Riviera convertible 4.1 V-6 with twin turbos.

The pace cars gave the Brickyard its first hint of the racing potential of the V-6, which earned the pole for the 1985 Indy 500. Pancho Carter led the field that year with a full-race version of the V-6 that was clocked at a record-setting 212.583 mph. Seven years later, Roberto Guerrero drove a Buick V-6 at 232.482 mph to earn the Indy pole position with a qualifying record that stands today -- an impressive achievement for a push-rod engine with such humble origins. With a V-6 based on Buick's production engine, Scott Brayton won the 1995 Indy pole with a speed of 231.604 mph.

The V-6's reputation as a "shaker" led Buick to start a series of improvements that started in 1977, when Buick developed an even-firing sequence that made the engine much smoother. "We split the crank pin by 30 degrees at each stroke and actually made it a six-stroke crank with 120-degree spacing -- even-firing intervals. That was probably the most significant development during my tenure as far as keeping the engine a viable one for long-term usage," said Studaker, who retired in 1980 after 34 years with GM, the last 30 with Buick.

In 1988, Buick reworked the 3.8-liter V-6 so extensively that it renamed it the "3800 V-6," this for its metric displacement. It featured sequential-port fuel injection, a gear-driven balance shaft (to reduce vibration), roller lifters, and on-center crank pins. The result was 23 percent less reciprocating mass, less vibration, and reduced piston friction. Horsepower moved up ten percent, to 165 at 4,800 rpm, while torque jumped to 210 lb-ft at 2,000 rpm. The 3,800 propelled the new limited-edition Reatta two-seater from 0-60 in just under ten seconds, provided improved mid-range acceleration, and yielded 19 mpg city, 29 highway, according to the EPA.