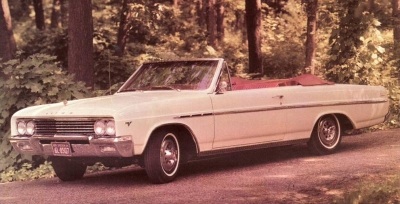 By 1967, as the horsepower war was really heating up, only about 10 percent of the 193,333 Specials/Skylarks came off the line with the V-6 Fireball. Most buyers were choosing one of the three V-8s offered in Buick's midsizers by then. A 300-cid V-8 was optional in the Special and upscale Skylark, and a 340-cid unit was available in the Skylark. In addition, the high-performance GS 400 variant of the Skylark debuted for 1967 with a monster 340-bhp 400 V-8.

Oldsmobile had made the V-6 standard in its F-85 compact for 1964, and production of Olds models with this engine reached 66,100, the high-water mark at that time. Olds, however, switched to the 250-cid Chevrolet straight six for 1966. With the Buick Special and Skylark as GM's only customers for the V-6, production fell to less than 20,000 units in the 1967 model year -- hardly enough to warrant keeping the engine in production.

The V-6 thus became an unwanted stepchild at GM, so the rights to that motor were sold to Kaiser-Jeep for an undisclosed sum. The tooling was shipped to Toledo, Ohio, where the engine was produced as the "Dauntless V-6" until 1971. For 1968, the Special and Skylark were redesigned (gaining about 100 pounds), along with the similar Chevrolet Chevelle, Olds F-85/Cutlass, and Pontiac Tempest/Le Mans. At this point, Buick had little choice but to follow Oldsmobile's lead and switch to the Chevy inline six as the base engine for its intermediates.

GM was temporarily out of the V-6 business -- until war in the Middle East completely changed the political and economic landscape. In October 1973, OPEC, the Arab-led oil cartel, shocked the world with an embargo. Suddenly, V-8s were out and fuel economy was in. Prodded by necessity, GM desperately wanted to bring its orphaned V-6 back into the family.

"We were going along fat, dumb, and happy with the economy, building bigger engines with V-8s all the time," Studaker remembers. "We had a 350 small job, we had a 430 for our upper series, we went to a 455, and we were working on engines in the 500- to 520-cubic-inch range when, all of a sudden, all hell broke loose. The oil embargo was instituted and, of course, 500- or 525-cubic-inch engines were no longer in vogue. Needless to say, the program stopped immediately."

With fuel economy the new Number One priority and no time to design a completely new engine, Buick looked in the parts bin. The only passenger-car six-cylinder engine in production at GM in 1973 was Chevrolet's old inline unit. The Chevy six, however, was too long to fit into Buick's new Skyhawk, a sporty spinoff of the Chevy Monza that was set to debut for 1975. But there was room for a V-6 ...

Buick engineers located one of their old V-6s in a junkyard on Dort Highway in Flint, Michigan (less than two miles from the factory where it had been produced), rebuilt it to factory specs, and installed it in an Apollo, the only 1974 Buick offered with a six-cylinder (the Chevy 250). The compact Apollo, a Chevy Nova clone, had arrived the year before as part of a GM badge-engineering binge. Oldsmobile's version was called Omega, Pontiac's the Ventura. String the first initials of the four cars together and they spell "NOVA." The V-6 fit easily into the Apollo's engine bay, which had been originally designed to hold either a straight six or a small-block V-8.