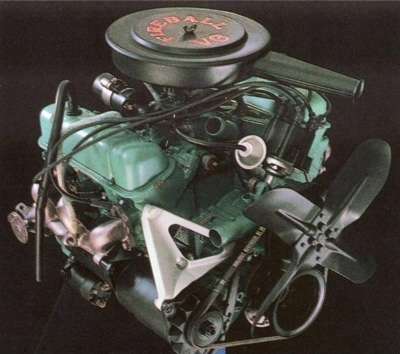 Buick increased the V-8's bore from 3.50 inches to 3.625 and stretched the stroke from 2.80 inches to 3.20 to give the V-6 a 198-cid displacement. With a two-barrel carburetor, horsepower was a respectable 135, 20 less than the V-8. That was enough to propel the Special to 60 mph in about 12.5 seconds (two seconds slower with automatic according to Road & Track) -- hardly muscle-car territory but more than competitive with its six-cylinder rivals.

The automotive press heralded Buick's new engine as a major achievement. Motor Trend magazine named the 1962 Special "Car of the Year" and praised the V-6, also called Fireball, for its "pure progress in design and originative engineering excellence." Road & Track, also very upbeat, said that "The V-6 engine sounds and performs exactly like the aluminum V-8 in most respects," though it pointed out that performance was down about 10 percent. Buick engineers, meanwhile, modestly claimed that economy was "at least 8% better than the V-8." R&T estimated 20-24 mpg.

Notably, this was the first mass-produced V-6 to be offered in an American passenger car. The Italian automaker Lancia had sold a handful of V-6 Aurelia sedans in the U.S. during the early Fifties, while GMC truck had introduced a 305-cubic-inch V-6 in its 1960 pickups. However, both non-Buick engines featured 60-degree angles between cylinder heads, which allowed even-firing intervals; so Buick's engine was unique for its 90-degree design.

The Fireball V-6 had the desired impact in the marketplace. Despite a price increase on the V-8 models, the new engine enabled Buick to lower the base price on the Special coupe to $2,304 and tout both performance and economy. The advertising slogan was "Six for Savings -- V for Voom." Production of the Special and sporty Skylark variants soared from 86,868 in 1961 to 153,843 in 1962, and more than 59,000 of the 1962 Specials were equipped with the new V-6. So why hadn't Buick or another American car company built a V-6 sooner?

"A V-6 is a little more expensive to build than a line six because you have two cylinder heads," Studaker explains. "And car size back then didn't require it. Really, we were kind of pushed into it because the Special wouldn't take a line six. It was designed for the aluminum V-8." Since Buick was trying to save money, the division dismissed GMC's truck V-6 from serious consideration. The Special was designed around a 90-degree V-8; the 60-degree truck V-6 was taller and would have required considerable re-engineering to fit into Buick's compact car, increasing the cost. Because the truck engine was a completely different design, it didn't share any parts with the V-8, so there was no cost benefit from a manufacturing standpoint.

GM Engineering was tinkering with a 120-degree V-6 design at that time, but Studaker describes it as almost as wide as a "flat" or horizontally opposed engine, creating east-west space problems in the Special's engine bay. During this era Pontiac was touting its "Wide Track" design; Studaker says a 120-degree V-6 would have necessitated "Wide Wide Track" in the Special. The clincher in favor of Buick's V-6 was that it could be built at the existing engine plant in Flint, which was tooled to produce 90-degree engines.

Though the V-6 won critical acclaim and successfully filled an economy niche in Buick's lineup, most buyers were getting their "voom" from V-8s instead of V-6s. In 1963, 40 percent of the 148,770 Specials and Skylarks produced were powered by the V-6. In 1964, the Special/Skylark moved up to a larger and heavier intermediate-size 115-inch-wheelbase chassis (120 inches for wagons). That same year, displacement of the V-6 grew from the original 198 cubic inches to 225.

Meanwhile, GM sold the rights of the aluminum V-8 to Rover (and that engine is still with us in updated form in their luxury sport-utilities!), and Buick switched to a 300-cid cast-iron engine for its small V-8. The V-6 was bored to 3.75 inches and stroked to 3.40 to make it three-fourths the size of the 300 V-8, thus allowing the two engines to share pistons, rods, and other key components. Horsepower jumped by 20, to 155 -- the same as the base version of the departed aluminum V-8.