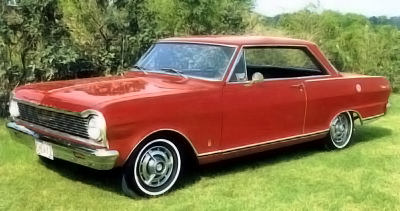 In 1965, car buyers continued their drift upmarket into mid- and full-size cars, which caused the 1965 Chevrolet Chevy II to struggle.

The compacts that had been newsmakers in the early 1960s -- Tempest, F-85, Special, Falcon, Comet, Dart, and Valiant -- grew bigger and heavier and more powerful as the decade wore on. In Chevrolet showrooms, the Chevelle Malibu and Impala set sales records, while the virtually unchanged 1965 Chevy IIs were gathering dust.

And that's really too bad, because the 1965 Nova SS was a neat little car. In styling, this was the ultimate refinement of the 1962-1965 bodyshell. Highlighted by a new grille, taillights, and trim, the look was clean and custom. The interior was the most luxurious yet.

In the other series -- 100 and Nova -- sedan rooflines were modified for a more "formal" look, and the Nova two-door sedan was again dropped, this time for good.

Although the 1965 Chevy II featured new front and rear styling, sedans also had a new roofline. The series 100 two-door sold for $2,077 with the six. This base model doesn't have a radio -- but being a Texas car, it has air.
©2007 Publications International, Ltd.

But, for Chevy II enthusiasts, 1965 is best remembered as the year the Chevy II became a muscle car. The V-8 choices were expanded to include 250- and 300-bhp versions of Chevy's hot 327 V-8, suddenly putting Nova SS performance practically on a par with the GTO, 4-4-2, and 271-bhp Mustang 289s-at least in straight-line acceleration.

Consumer Reports noted that sedan and wagon buyers would do better to choose a Dart, Valiant, or the larger Chevelle. "Though the best dimensioned 'package' of the group, the Chevy II seems to have been neglected by its manufacturer. The Chevy II is a capable car but one offering none of the refinements present in some other compacts."

Once again, Chevy II obits were being written by the automotive press, and Chevrolet General Manager Semon E. Knudson tried to clear the air in a press conference at the 1965 Chicago Auto Show. "There were some rumors around last fall that we were going to discontinue it but we have no intention whatsoever of dropping the Chevy II," he said. And once again, reports of the Chevy II's demise were greatly exaggerated -- there would be a 1966 Chevy II.

Continue to the next page to learn about the 1966 Chevrolet Chevy II.