Studebaker described the Gran Turismo as "A distinctive new sports classic...a rarity among the most distinguished automobiles of the world."
©2007 Publications International, Ltd.

Car show visitors first saw the 1962 Studebaker Gran Turismo Hawk displayed as two specials: the White Hawk and the Black Hawk. The former featured a white exterior with black interior, black half vinyl roof, and knock-off wire wheels. The Black Hawk reversed the color scheme. When shown, they introduced the public to the half vinyl roof. Both cars were sold after their auto show appearances.

Stevens wanted to keep the spirit of the Gran Turismo Hawk alive, just as he wanted Studebaker to continue building cars. He suggested to Egbert an all-new line of 1964-1967 cars to make the firm more competitive. Stevens knew they would have to be different, priced right, and cheap to tool. His spectacular proposal consisted of three models: a top-of-the-line Sceptre two-door personal sport coupe (the Gran Turismo replacement), a four-door sedan (Lark replacement), and a station wagon. Stevens' team built quarter-size models of each car, placed them in individualized cases, and Stevens himself took them to New York for the directors to see.

The White Hawk was a Gran Turismo Hawk show car that made the rounds in 1962.
©2007 Publications International, Ltd.

Echoing Egbert's enthusiasm, the board supported the plan to produce the cars. Stevens thus went to Turin, Italy, to have prototypes built. Not having the funds to hire a big name firm like Pininfarina, he looked to the backyard shops that were good, but needed work. One of them, Sibona-Bassano, scrutinized the models and agreed to build prototypes for an incredibly low $16,000 each.

­Egbert and Stevens couldn't have been more pleased when the cars were ready a few months later in 1962. They were easy to drive and were photographed with beautiful Italian models before coming to the U.S. To save money, each car featured a deluxe and standard side, allowing for a total of six different models. Of course, the Sceptre rated as the most impressive. The sides were single planes -- none of the bulges or offsets so common at the time. For privacy, without obstructing the view, the sail panels were of darkened translucent plastic. The top surface of the roof sported matte silver.

Here was the first car with wall-to-wall lighting at the back and front, the latter a single horizontally mounted fluorescent-type light made by Sylvania. Huge cornering lights were mounted on the front fenders, each incorporating a red warning light at the back of the unit. Air intakes for the engine and the car's interior were separate, with the interior air being drawn in through a distinctive grille at the leading edge of the hood. Both the hood and the trunk opened from the car's mid-line, making access to both areas easier.

Even with a beautiful and practical design, the Hawk's lifespan was short. Read about the last days of the Gran Turismo Hawk line on the next page. 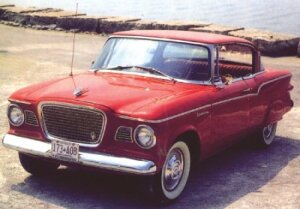